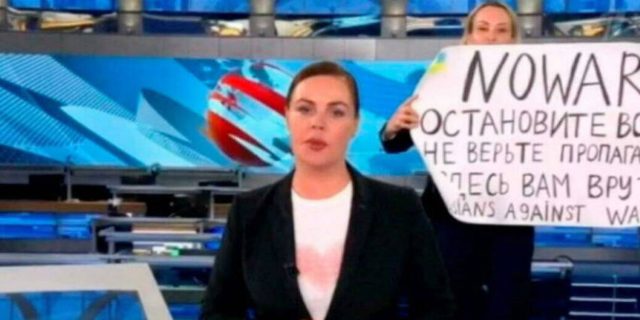 IRussian journalist Marina Ovsiannikova will leave the Pervy Kanal channel on her own. Having become an anti-war muse, she rose to fame after appearing on a pro-Kremlin television newscast to denounce the offensive in Ukraine. “Today I went to Ostankino (headquarters of the channel), I sent all the documents for my dismissal on my decision,” she said in an interview with the continuous news channel France. 24.

Marina Ovsiannikova made a name for herself when she burst into Russia’s most-watched newscast live Monday night on Pervy Kanal with a sign criticizing Moscow’s military operation in Ukraine and denouncing controlled media ‘propaganda’ by power. She explained that she wanted to “send a strong message to say that the Russians are against the war, that we must not trust propaganda and what we say on TV and that we must make this distinction between the lie and the truth”. “I’m scared, of course, but I don’t think I’m part of the scum,” she defended herself, when asked about the official discourse against anti-war activists in Russia.

Read:  War in Ukraine: this sentence has become the symbol of resistance

According to the Kremlin, the conflict in Ukraine reveals who the “traitors” are in Russia. “Some quit, some leave the country. It’s a purification, ”said Russian presidential spokesman Dmitry Peskov on Thursday. For the protesting journalist, “the people who take to the streets to protest are not traitors, they are citizens”. “Russian society is divided, part, maybe half, is against the war and half supports President Putin,” she said.

This 43-year-old woman, mother of two, has also declined French President Emmanuel Macron’s offer of asylum because she does not “want to leave” her country. “I am a patriot, my son is even more so,” she said in an interview with the German magazine. Der Spiegel broadcast Wednesday evening. After being arrested, she was immediately sentenced to a simple fine and released. However, she still faces criminal prosecution punishable by heavy prison terms, under the terms of a recent law cracking down on any “false information” about the Russian army.