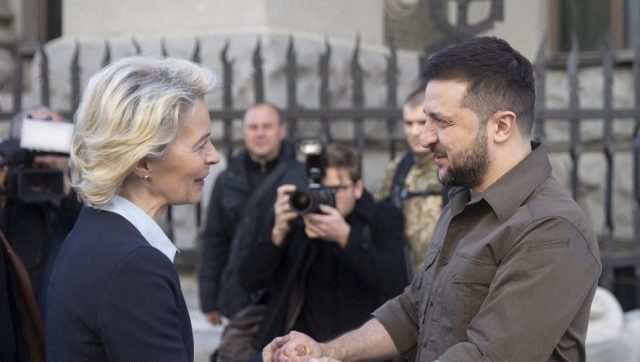 The candidacy of Ukraine and Moldova to join the EU will be one of the central questions examined by the European Council from Thursday 23 June in Brussels. Our decryption with Gaëlle Marti, director of the Center for European Studies and professor of public law at Jean-Moulin Lyon 3 University.

The European Council is considering Ukraine’s candidacy this Thursday 23 June. What is at stake?

It is a question of truly anchoring Ukraine in the camp of the European Union, granting it candidate status or not and starting accession negotiations. This will require a unanimous vote of the Twenty-Seven. The issue is important.

Ukraine filed an application for membership at the start of the war to benefit from the mutual assistance clause which appears in European treaties, in the event of armed aggression. It is not necessarily military assistance, the countries remain free of the means to be used, but it is a further step in solidarity with Russia.

Could Ukraine, Moldova, Georgia have other reasons to knock on the door of the EU?

The EU also remains a huge economic opportunity, with this market encompassing 500 million potential consumers. This also makes it possible to ensure the free movement of people, to benefit from coordination to reduce dependence on energy sources, especially Russian ones. But the geopolitical structure caused by the war is the main factor.

These countries which wait in the antechamber of Europe

This European Council also raises the question of equal treatment between Ukraine, Moldova and the Balkan countries “which have been waiting for years in the European antechamber”, underlines Gaëlle Marti, professor of public law at Jean-Moulin University. Lyons. “Turkey, Albania, North Macedonia, Montenegro and Serbia are officially candidates. Bosnia and Herzegovina and Kosovo do not yet have this status. It is not in the interest of the EU that these countries feel excluded.” There remains the case of Georgia, requested by Brussels to reform before claiming candidate status. Faced with the Russian threat, tens of thousands of people marched on Monday in the capital, Tbilisi, to ask for EU membership. A clear message sent to Brussels.

What are the possible scenarios?

The most likely is that the Twenty-Seven will agree to give this candidate status to Ukraine and Moldova (a consensus would have been reached, overcoming the reluctance of Denmark, the Netherlands and Portugal, according to the French minister in charge of Europe, Clément Beaune, Editor’s note). But that does not prejudge their membership, because there is then a very long process aimed at verifying whether the country meets the criteria.

There is in particular a very precise examination of the economic criteria, the State must be able to resist the competitive pressure of the common market, in which companies and goods circulate freely. Because this can disrupt the economy of a country, but also that of other States, there can be massive relocations when the cost of living is lower in a country.

There is also a political criterion, respect for the principle of the rule of law, democracy, EU values ​​and the European Commission said that there were efforts to be made in the area of ​​corruption. The state must also adopt in its law that of the European Union, but Ukraine already has a significant percentage which is in conformity.

The question is whether Ukraine will be able to meet all the reforms that will be asked of it, knowing that the war has every chance of lasting. It is very complicated to make a parliament work in this case.

It is only once all this has been achieved, if it is, that an accession treaty will eventually be signed.

This would modify the internal balances of the EU, there is also an element of unknown: do they have the same preferences in terms of energy, agricultural policy. All of this raises some pretty dizzying questions.

Vienna once again becomes the most pleasant city in the world