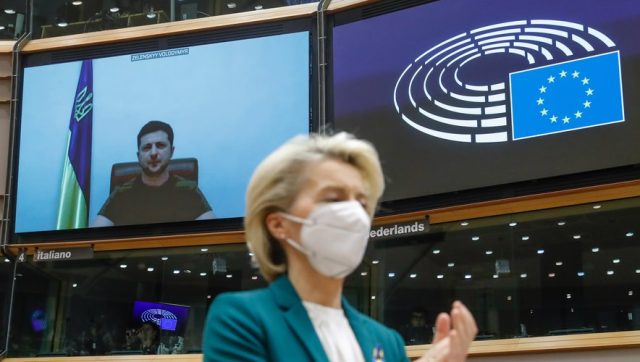 Will Ukraine soon enter Europe and how?

The European Council, which brings together all the Heads of State of the European Union, could decide by tomorrow, Friday June 24, in favor of granting the status of “candidate country” to Ukraine.

This is a first step which will open negotiations on a highly symbolic membership, in the midst of Ukraine’s conflict with Russia.

What Ukraine has already implemented

The negotiations will cover 35 technical and complex chapters, such as free movement, public procurement, agriculture and justice. “Ukraine has already implemented 70% of EU rules, norms and standards”announced Wednesday, June 22 the President of the European Commission, Ursula von der Leyen.

Ukraine has “a solid presidential and parliamentary democracy, a public administration which functions very well and which made it possible to make the country function during this war”, welcomed the President of the European Commission.

Read:  The United States and Iran on the cusp of an agreement

How long will the process take?

It will take a long time. The process could take at least ten years. On the other hand, it is hard to imagine negotiations taking place right away while the country is at war.

Can the EU refuse membership?

“He seems likely that Ukraine will be declared a candidate. Reluctant countries no longer have a choice now that Germany, France and Italy have said yes,” a European diplomat told France Télévisions.

This same diplomat explains that “a refusal would have a very strong political cost, whereas giving an agreement does not cost much”.

What Ukraine needs to change

Ukraine’s membership is not without conditions. The country will have to reform its institutions, particularly in terms of corruption.

Sébastien Maillard, director of the Jacques-Delors Institute warns in Le Monde that Ukraine will have to undergo a “de-oligarchization” of its economy.

What it can change for the EU

EUonce Ukraine’s candidacy has been validated by the Council, must “establish a program of support and financial aid allowing the candidate to carry out the necessary administrative, political and economic reforms to integrate the legislative corpus” detailed Georgina Wright, of the Institut Montaigne, to Le Monde.

Read:  Ukraine: under Russian bombs, in the Donbass

“Added to this is the criterion of the acquis communautaire, which means that the candidate state must be able to integrate all the existing European standards into its national law”, she specified.

And the other requesting countries…

Moldova and Georgia also officially asked to be candidates, a few weeks after the beginning of the conflict.

Several Balkan countries – Albania, North Macedonia (candidate in 2005), Montenegro and Serbia – have been waiting for several years, them too, to enter the European Union.

If the Ukrainian candidacy is accepted, it will be necessary to send “a signal” to the Balkans. “Probably promises to deepen the partnerships already in place”, explained a European diplomat to France info.

Vienna once again becomes the most pleasant city in the world