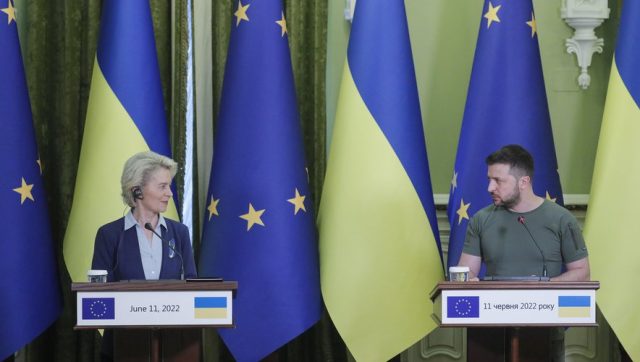 Ursula von der Leyen, the President of the European Commission, promised this Saturday, June 11, during a visit to Kyiv, that the EU would deliver its opinion on the membership application of Ukraine to the European Union.

During a joint press conference with the Ukrainian President organized this Saturday, June 11, Volodimir Zelensky, the President of the European Executive declared that her meeting with the Head of State “will allow us to finalize our assessment by the end of next week”. The Commission will have to say whether or not it recommends the integration of Ukraine into the Community bloc.

In the event of a positive opinion, a very long process would then begin. Initially, the governments of the Twenty-Seven should all accept this prospect in turn and then start discussions to agree on the reforms they would demand from Ukraine in exchange for its membership.

Read:  Call of Duty: a future on PS5, but what about the Nintendo Switch? Microsoft has decided!

“All of Europe is a target for Russia”

Ursula von der Leyen, visiting Kyiv for the second time since the invasion of Ukraine by Russia on February 24, reminded Volodimir Zelensky that despite progress on administrative reform in particular, many work remained to be done. “You have done a lot to strengthen the rule of law, but reforms still need to be put in place, to fight corruption for example,” she said.