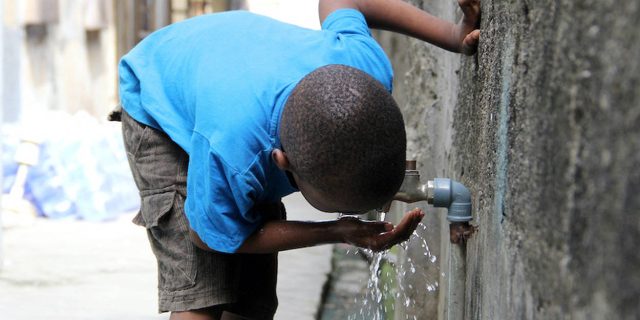 Sn the continent that is experiencing the strongest population growth in the world, the most vulnerable populations are on the front line in the face of water stress and the deleterious consequences of climate change. Massive funding and governance, two major factors could make Africa(s) the continent of solutions.

There are disasters of which only the figures allow us to apprehend the urgency and scope; that of water scarcity in Africa(ies) is at the forefront. On the continent, one in three citizens is already affected by the lack of water. Today, 400 million people do not have access to basic drinking water in sub-Saharan Africa. Catastrophic? Undoubtedly, but the worst is yet to come. By 2025, tomorrow therefore, nearly 230 million Africans will be directly impacted by the lack of water in their daily lives, in their simple capacity for development as human beings. In three years – only three years – some 460 million people will live in regions of the continent that will be under water stress, ie where the demand for water will exceed the available resources.

Conflicts and violence related to access to water, massive population displacements, but also declines in agricultural yields, desertification of entire regions, increased travel times to access water, chronic food insecurity…: according to the Unicef, the deleterious consequences of the lack of water are underway and will primarily affect the populations of the Middle East and North Africa (MENA) region. In these countries, water stress is already affecting nearly nine out of ten children, with serious consequences for their health, diet, cognitive development and future livelihoods as adults. A way for the United Nations Children’s Fund to recall the obvious: without water, there is no life.

Inequalities in access to water reinforced by the health crisis

If the consequences of water shortage are well known, so are its causes, first and foremost the extraordinary demographic growth of Africa. The continent should have more than 2 billion inhabitants by 2050, a unique leap in human history: more than 90% in about thirty years between 2020 and 2050, unheard of. Global warming will increase the frequency of disturbances: droughts, floods, storms. So many extreme climatic events that will make access to water rarer, more unpredictable or a resource more polluted, when it is not all three at the same time. Devastating crops, floods also damage water treatment infrastructure and disperse faeces; the rise in temperatures promotes the proliferation of germs and bacteria, leading to waves of waterborne infectious diseases, such as cholera, for which the fight is still not over. Vaccines, okay, but access to drinking water first! The most vulnerable populations are also the most immediately affected: thus for the continent alone, in Mali, Burkina Faso or Cameroon, but also in Yemen, and even in Namibia, there are tens of millions of people who need today of access to water and sanitation infrastructure. In Mali, for example, more than 65% of the inhabitants do not have access to drinking water and more than 70% have no sanitation service.

The finding is all the more alarming since the Covid-19 pandemic. The lack of infrastructure significantly increases the risk of the disease spreading and further weakens the already precarious populations. How to wash your hands regularly when you can’t find enough water to stay hydrated? If the health crisis widens global and regional inequalities in access to water, the legitimate fight against the virus could also lead to a relaxation of infrastructure development efforts, infrastructures that are already suffering from decades of chronic underfunding. Already, long-established funding programs have been suspended, their financial resources reallocated to the fight for health in the face of Covid pressure. But “one of the reasons for the lack of investment in water […] is that these services are perceived as a social issue […] rather than economic”, for Richard Connor, author of a report published under the aegis of the UN, according to which “awareness of the economic importance of water should constitute a catalyst […] to increase investment.

In Dakar, a World Water Forum expected on concrete commitments

Access to drinking water and sanitation are however part of the global sustainable development goals, SDG6. Many initiatives have thus been launched, such as the Water Security for All campaign led by Unicef, whose Director General recently considered that “the global water crisis is not only looming on the horizon, it is already there”. This initiative works in particular to provide drinking and affordable water supply services that are also able to withstand the impact of climate change, to drive measures to prevent water scarcity (assessment of resources, sustainability withdrawals, etc.) and to strengthen cooperation between water stakeholders and local populations, while promoting better management of water supply services. One example among many others.

The next World Water Forum**, which will be held in Dakar from March 21 to 26, will take place for the first time since its creation in 1997 in sub-Saharan Africa. Let’s take it as a major symbol of awareness. Presenting itself as a true “catalyst for action to accelerate universal access to water and sanitation”, this ninth edition of the forum has set itself four priorities: water and sanitation security, rural development, cooperation and “tools and means” including, in particular, questions of funding, governance, knowledge management and innovation. The opportunity for the President of the African Union, Macky Sall, who is hosting this forum in his country, to call for a “qualitative transformation of the daily lives of the populations [et une] improving the performance of production sectors”.

While “water occupies a vital place in the satisfaction of our needs, in the preservation of our environment and in the development of our countries, continues the Head of State, the combined effects of climate change and the increase in the population leading to the scarcity of water, it is necessary to address the problem of water from the angle of the promotion of peace (and) in coherence with the Emerging Senegal Plan (PSE) aimed at the transformation structure of the economy, the promotion of human capital, including the reduction of inequalities through access for all to drinking water and sanitation”.

In Dakar, donors, public and institutional decision-makers, but also private actors and civil society will face a major challenge: to move from words to action, financed, organized and measurable. They will have to demonstrate their common will to massively build the necessary infrastructure, a sine qua non for the fight against water stress and the effects of climate change.

Without finances, there is no way out, but without governance, one more summit for disappointed hopes. Let’s bet that everyone is aware of what is at stake, with their eyes wide open.