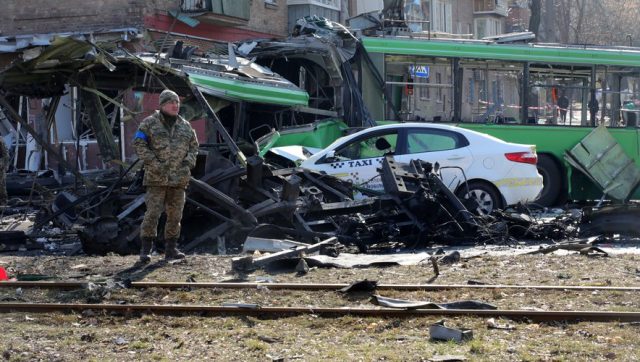 Four weeks into Russia’s invasion of Ukraine, Vladimir Putin’s army seems to be bogged down. Negotiations are continuing between the Ukrainian and Russian delegations. Russia, which is accused by Westerners and Ukrainians of targeting civilians. Here is the situation update this Thursday, March 17, 2022.

The Russian army continued the shelling of cities in Ukraine on Thursday but its offensive, which is entering its fourth week, is still deprived of major success, while talks continue between the two camps. In Mariupol, a besieged port in the southeast, rescuers were trying to find survivors trapped under the rubble of a theater that housed many civilians, target the day before, according to the Ukrainian authorities, of a Russian air strike, what Moscow denies.

“The air-raid shelter held. Now the rubble is being cleared. There are survivors but we don’t know the number of casualties yet,” an adviser to the city’s mayor told Reuters by telephone. Petro Andrushchenko. In northern Ukraine, in Chernihiv, the city’s governor, Vyacheslav Tchaus, said 53 civilians had been killed in the past 24 hours during intense shelling, an unverifiable report from an independent source.

In Kyiv, the capital, a building suffered heavy damage in the Darnitsky district, due according to local authorities to the debris of a missile shot down in the early hours of the day. As residents bustled about cleaning up the mess, a kneeling man wept next to a woman’s body covered in a bloody sheet.

Read:  War in Ukraine: what Putin and Macron said to each other

Talks between Moscow and Kyiv began Monday via video link and were due to resume Thursday for the fourth consecutive day. Dmitry Peskov, the Kremlin spokesman, said that the Russian delegation was expending “colossal” energy in these discussions and showed more will than the opposing side. However, he denied that the two sides had made any significant progress towards a draft peace accord.

An adviser to President Volodimir Zelensky, Okelsiy Arestovitch, said the Ukrainian head of state still demanded recognition of the borders inherited when the Soviet Union broke up in 1991.

Russia says it is “purifying”

During his press briefing in Moscow, Dmitry Peskov also rejected the decision of the International Court of Justice requiring Russia to cease its offensive and again deemed unacceptable the comments of US President Joe Biden calling Vladimir Putin a criminal of war. The Russian president showed no signs of relenting in a televised appearance on Wednesday, saying that the “special military operation” launched on February 24 was proceeding as planned and promising that Russia would “purify” itself by distinguishing “the true patriots of the traitors”.

“In these difficult times (…), many people show their true colors,” Dmitry Peskov said on Thursday, referring to these statements. “Some leave their jobs, their working life, some leave the country. This is how the cleaning is done.” Russia says its “operation” in Ukraine aims to demilitarize and “denazify” the country, which Vladimir Putin presents as an artificial state. Kyiv and its Western allies accuse Moscow of wanting to submit its neighbor and impose a government on it.

Volodymyr Zelensky in front of the German parliament

In a short speech delivered by video link before the German Bundestag, which received a standing ovation, Volodimir Zelensky referred to the fall of the Berlin Wall in 1989 to urge Chancellor Olaf Scholz to “destroy” the new dividing wall according to him ” freedom from servitude” in Europe. The Ukrainian president, who is Jewish, also referred to the Holocaust, adding: “In Europe today, a people is being destroyed.”

Vladimir Putin, for his part, on Wednesday compared the unprecedented economic and diplomatic sanctions imposed on Russia since the start of the war, to the pogroms against the Jews in Germany in the 1930s. Ukraine by four axes: northeast and northwest towards Kyiv, east via Kharkiv, the country’s second city, and south via Crimea, annexed by Moscow in 2014.

In a memo released Thursday, British intelligence said the invasion operation was “largely stalled on all fronts”, with Russian forces suffering heavy losses in the face of determined and well-coordinated Ukrainian resistance. The war has claimed the lives of hundreds of civilians according to the United Nations and has already made more than 3 million refugees.