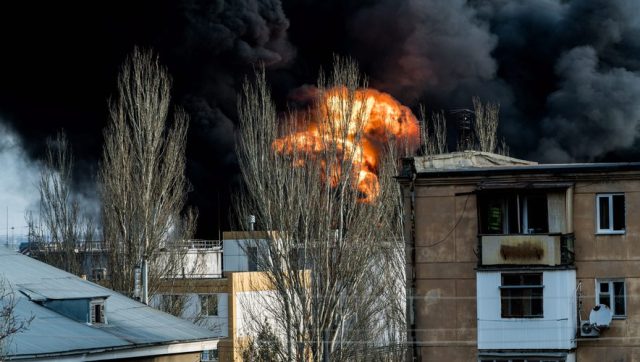 All information related to the Russian invasion of Ukraine on Wednesday April 6, which marks the 42nd day of the conflict.

– Turkey calls for an investigation into the Boutcha massacre

Turkey calls for an independent investigation after the massacre in Boutcha.

The Turkish Foreign Minister reacted: “The images of the massacre, which have been published in the press from various regions including Boutcha and Irpin near kyiv, are not only shocking but also sad for humanity.”

– Governor of Luhansk urges civilians to leave while there is time

The governor of Luhansk, in eastern Ukraine, on Wednesday April 6 expressed the hope of evacuating civilians via five “humanitarian corridors” and urged the inhabitants of the region to leave “as long as It’s certain”.

Ukraine claims that the Russian army, which invaded its territory on February 24, is regrouping for a new offensive in the Donbass region including Luhansk.

“We’ll get everyone out if the Russians let us reach assembly points (for evacuations). Because as you can see they don’t always respect ceasefires,” Serhiy Gaidai wrote, governor of Luhansk, on Telegram messaging.

“I appeal to everyone in the Luhansk region: evacuate while it’s safe. As long as there are buses and trains, take the opportunity.”

Serhiy Gaidai said railway tracks in Donetsk region, another part of Donbass, were damaged this week and it took several hours to repair.

“It’s an additional red flag,” he said. In another video message, Serhiy Gaidai said the Russian army failed to break through Ukrainian defenses in his area but was destroying “everything in its path” and “nothing would stop it”.

Ukrainian Prosecutor General Iryna Venediktova said on Tuesday April 5 that around 5,000 Russian war crimes have been identified and are being investigated in Ukraine.

“Even in a cruel situation, war crimes are a first step, before crimes against humanity and genocide.”

\u26a1\ufe0fAround 5,000 Russian war crimes under investigation in Ukraine, Prosecutor General Iryna Venediktova said at a briefing in Bucha on April 5.

“Even in such a cruel situation, war crimes are first on the spectrum, followed by crimes against humanity and genocide,” she said.

– The United States will announce this Wednesday new sanctions against Russia

The United States and its allies will announce this Wednesday April 6 new sanctions targeting Russian financial institutions and officials and ban all new investment in Russia, the White House said on Tuesday April 5.

The sanctions will tighten restrictions on financial institutions and state-owned companies in Russia and will target Russian government officials and their families, White House spokeswoman Jen Psaki said in a press briefing.

“Tomorrow, we will announce, in coordination with the G7 and the European Union, new measures that will impose costs on Russia and send it even further down the path of economic, financial and technological isolation”, announced Jen Psaki.

These measures “will degrade key instruments of Russian state power, impose acute and immediate economic harm on Russia, and hold the Russian kleptocracy that funds and supports Russian President Vladimir Putin’s war to account,” he said. -she adds.

She declined to comment on reports that the sanctions would target Vladimir Putin’s daughters.

– US to provide additional $100 million in aid to Ukraine

The United States will provide additional security assistance of $100 million (91.8 million euros) to Ukraine, which will include anti-tank systems, the United States Secretary of State said on Tuesday April 5. Anthony Blinken.

Donor countries meeting this Tuesday, April 5 in Berlin, including Germany, France and Romania, agreed to allocate 659.5 million euros to Moldova to help it cope with the arrival of more of 100,000 Ukrainian refugees on its territory, declared this Tuesday April 5 Annalena Baerbock, the German Minister of Foreign Affairs.

“We will strengthen Moldova’s resilience also in the financial area. To this end, we have agreed today to support Moldova with loans, budget support and other financial assistance amounting to 659.5 million dirhams. ‘euros.’

Russian Foreign Minister Sergei Lavrov on Tuesday (April 5th) accused Western countries of seeking to torpedo negotiations between Russia and Ukraine, by fueling, in his words, “hysteria” over suspicions of crimes of war by Russian forces.

kyiv and Western countries said there was evidence, including images and testimonies collected by Reuters and other news outlets, that Russia committed war crimes in the town of Boutcha, in the suburb of the Ukrainian capital.

Moscow denies having committed war crimes and calls these accusations “monstrous forgery”. Sergei Lavrov said, without providing evidence, that Moscow believes the accusations are designed to derail the negotiation process after reporting progress after meetings of the Russian and Ukrainian delegations last week in Turkey.

“We are inclined to think that the reason for this is the desire to find a pretext to end the ongoing negotiations,” the minister said in a video released by the Russian Foreign Ministry.

The European Union proposed on Tuesday to introduce new sanctions against Russia, including an embargo on Russian coal imports and a ban on Russian ships entering its ports, while saying it was considering stopping the purchases of Russian oil.

The abuses attributed to the Russian military in Boutcha and other areas in Ukraine will not go unaddressed, said European Commission President Ursula von der Leyen.