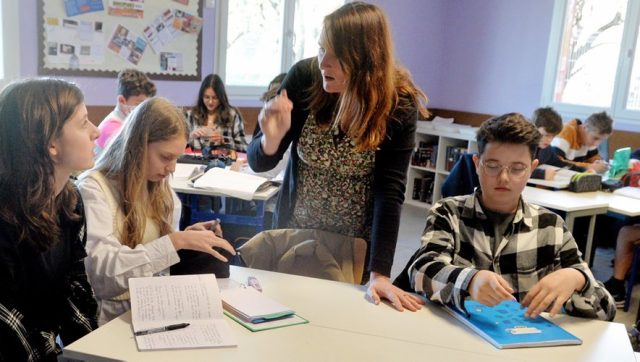 Integrated into 4th and 3rd grade at the Eridan International School in Montpellier, Olessia, Daria and Danys, refugees, want to forget the bombings and to live like any young person their age.

They are between 13 and 16 years old, all come from kyiv or outlying villages, and have all crossed Europe in several days to reach Montpellier. It was on February 24, when the Ukrainian capital was bombed, that they were forced to leave their home. They all say the same thing: 5 a.m., planes flying over the city wake up families and bombs explode.

A trauma for young people who relive this moment each time the sound of an airplane reaches their ears. Danys, 13, and her mother Julia spent several days in a camp in central Ukraine. They took part in humanitarian actions and helped the Ukrainian soldiers to camouflage their tanks.

The howl of the sirens all day long still resounds in their heads. “It was scary, says Danys, I wanted to go home but I couldn’t because of the sirens.”

A Ukrainian flag flanked on her shoulders, her mother testifies with tears in her eyes: “I can no longer tell the difference between sirens and silence. The slightest sound that comes close to it frightens me.” Courageous behind his glasses and his air of an angel, Danys would like to return to Ukraine and fight to defend it. “I want to help my country but I can’t,” he regrets.

The young teenagers are happy despite everything: “We love Montpellier and it’s a chance to be in this school. There is the language barrier but we can always speak English with the other students and have fun”, notes with wisdom Daria, 15, in very fluent English.

But the anxiety remains. Two days ago, the Russians bombed the shopping center which was located directly opposite Olessia, 14 years old. “It’s weird, she repeats, dismayed, I went to this shopping center every day.”

Safe in their new school and with their new friends, the teenagers gradually see their old daily life crumble through the media and social networks.

The fathers remained in Ukraine

The two young Ukrainians, longtime friends, consider themselves lucky. The journey from Ukraine to France, they did it together with their mother, one of their aunts, the cat and the dog. All in one car. Despite the discomfort, the length of the journey, the lack of sleep and the thirty-hour wait at the border, Olessia and Daria only want to remember the best: “We were all together, we had fun.”

Their fathers stayed in Ukraine because of martial law. They are not fighting for the moment but help from the south of the country the civilians who had to stay in war zones. Moved, Olga says that each call with her husband is difficult: “We don’t know when we’ll see each other again or how long it will last. We can’t plan anything. When I see the sea from my family’s apartment in welcome, I can’t help but think of those who don’t have the same luck, who can’t look at a clean sky.”

Physically, we are there but our heart is in Ukraine (Svetlana)

Her friend Svetlana adds: “Physically, we are there but our heart is in Ukraine.” If Olga, Julia and Svetlana chose France to take refuge, it is because they and their children already had contact with French correspondents thanks to their school in kyiv; Olessia had even already come to Montpellier.

It was Inna Neveu, manager of the France for you association, whom the three mothers knew, who directed the teenagers to the Eridan school. Another 16-year-old teenager, a brilliant student, whose parents remained in Ukraine, was also welcomed and educated in third class.

After the war, Olessia would like to stay in France to continue her studies because she loves our country very much. Danys wants to go to the United States to set up his business and Daria wants to return “to rebuild Ukraine”. In the meantime, these teenagers, like their mothers, continue to express their gratitude for the warm welcome offered to them in Montpellier.

“The schooling of a refugee child facilitates his socialization”

Head of the academic center for the education of newly arrived allophone children and children from itinerant families and travelers, Frédéric Miquel speaks.

How many Ukrainian children have you already hosted in the academy?

There are more than 420, from 3 to 18 years old, of which 200 are already enrolled in an establishment. This exceptional flow is added to our usual flow of allophone pupils which is on average 3,500 children per year and which had been reduced during the health crisis. We have many unaccompanied minors from Africa, Bangladesh or Albania in particular.

What is the procedure for integrating them into the school system?

It is a right for these children, the law says so. We first assess their level with tests in their native language, math and reading comprehension. At this point we need interpreters. Then, several options are possible.

They can be grouped together in educational units for allophone pupils where the levels are mixed from 6th to 3rd. They learn French intensively. They can be included in normal classes while benefiting, if necessary, from ten hours of weekly lessons in one of our 240 language support structures. There, they are entrusted to specialized teachers capable of teaching them French thanks to adapted pedagogies.

Do the teachers who welcome them need training?

For inclusion classes, training is not mandatory but we are setting up more and more continuing or initial training to better accommodate them. The child will obviously not understand everything that happens in the classroom but he will acquire other knowledge such as school codes, socialization and immersion in our language. It is important for its integration. As a rule, they learn very quickly.

Do families have a say in the type of schooling?

Sure. We take care, moreover, to take into account the family project, it is essential. There are those who arrived thanks to contacts, family, it is not the same thing as the refugees who disembark from a bus without the slightest link. Some families want to put down roots here, others plan to go as far as Spain or Italy, where there are large Ukrainian diasporas. Still others want to rebuild themselves before thinking about school. Most of them obviously plan to return quickly to Ukraine and some prefer to homeschool their children in connection with the program of their country of origin. Indeed, Ukraine has a fairly developed distance learning program. For these, we bring help in the form of tablets or computers. We adapt, we have to make lace.

If the flow of arrivals is very important in the coming weeks, do you envisage reinforcements in terms of staff?

Sure. All of this is coordinated under the direction of our rector Sophie Béjean, in conjunction with the Dasen and the ministry. We have started to think about reinforcements, but everything obviously depends on the distribution of children to be educated in the territory.