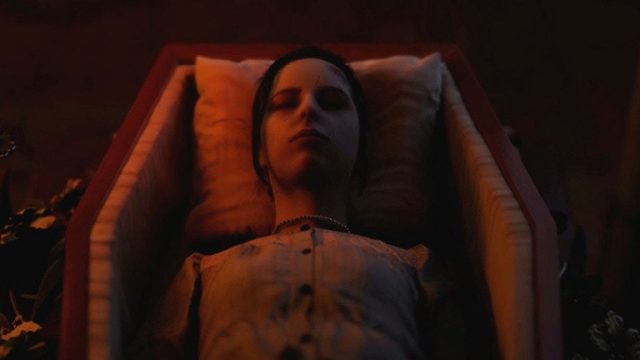 Martha is Dead, a new psychological thriller from the LKA studio, has awakened debates on censorship in video games. Let us return for the occasion to these controversial games of history.

The Hatred game has been questioned for its content at the pitch of incredible violence: A killer embarks on a mass massacre out of pure contempt for society. “It’s time for revenge and no life worth saving“, he launches before launching into violent acts. Misanthropic and ultra-cynical, the protagonist was temporarily No. 1 in sales on Steam, but access to it was banned in Germany as well as in Australia. Its designer , Jaroslaw Zielinski, was also accused of sympathizing with a Polish neo-Nazi group, the Polska Liga Obrony, to which he subscribed via Facebook. The Guardian also pointed to Destructive Creations’ willingness to exploit a culture war”between entrenched “hardcore” gamers and liberal critics“by observing their press release:”These days, when many games claim to be polished, colorful, politically correct and attempt to be a kind of higher art, rather than just entertainment – ​​we wanted to create something bucking the trend. Something different, something that can give the player pure gaming pleasure.”

In 2012, Spec Ops: The Line retraced the tragedies of war from the eyes of Captain Martin Walker, head of the Delta Force responsible for finding the trace of a US Army colonel. It was an adaptation of the short novel by Joseph Conrad. Players were literally amazed when they were tricked into raining white phosphorus on a building, only to discover that it was actually filled with civilians. And here they are then forced to circulate among the bodies, discovering the lifeless corpses of children and adults. Cory Davis, lead designer, told Polygon in 2012 that he wanted to make Walker an ordinary man with whom ordinary mortals can easily identify: “So we basically wanted to shred the average guy… and, right to the end, we really wanted to express as strongly as possible what can happen to the psychological state of someone going through these horrific events.“

A first-person horror game, Agony tasks you with escaping from hell and had raised expectations with some pretty mind-blowing trailers. This literal dive into the middle of the Underworld, without filters and without limits, lets you embody a character who wakes up in a world of blood, flesh and terror and has no memory of his past life. Finally, apart from its very gory illustrations, the game was mainly talked about for its poor qualities and will earn a score of 6/20 in our columns: “We can say that the label sticks with the product: Agony is indeed aptly named. Archaic and messy gameplay, confusing mechanics, non-existent AI, repetitive puzzles and technically not up to standard are all flaws that should convince you to avoid this game like the plague. And it’s not just the too few good artistic ideas (on PC, at least) that will save the boat from sinking.”

A controversial level dubbed No Russian from Call of Duty: Modern Warfare 2 was the subject of media uproar even before its release. Reminder of the context: the players embody a secret agent of the CIA on an infiltration mission in a group of Russian terrorists led by a certain Vladimir Makarov. One of their operations consists in executing the innocents of a local airport just to blame the Americans for the attack. Players have the option of not participating in the attack, although they cannot prevent it. But many mechanically began to unload their bullets. The game designer Mohammad Alavi spoke a few years later about this mission: “In the endless sea of ​​bullets that you fire at countless enemies without a moment of hesitation or thought, the fact that I managed to make the player hesitate even for a fraction of a second and that he actually thought about his actions before pulling the trigger – it gives me a sense of accomplishment”. But the idea is far from pleasing everyone. In Japan as in Germany, the level is modified: if the players decide to shoot at the civilians, it is a sure failure. In Russia, it simply does not exist anymore.

In Grand Theft Auto V, notorious criminal Trevor Phillips is ordered by the FBI to torture a suspected terrorist in order to extract information from him. The player is therefore offered a range of instruments including masses and electric cables. A lot of people are offended by the scene often considered gratuitous. Rights group Freedom from Torture joined Amnesty, teachers’ union ATU and MP Keith Vaz in condemning the footage just two days after the game was released.”Much like Modern Warfare 2’s infamous “No Russian” mission, where you gun down innocent people at an airport, the lack of context does this sequence a disservice. The series is best known by those who don’t play it as the one where you sleep with a prostitute and murder her to get her money back.”, wrote about this eurogamer.

Several times rewarded for its script and its staging but also withdrawn from sale a week after its French release in several stores, Sanitarium unleashed passions and established itself as one of the cult point and clicks of the 90s. player embodies an amnesiac, resident of an asylum who seeks his identity through gloomy and disturbing worlds. It was therefore a question of confronting the demons of the past and escaping the spiritual prison that awaits you. All of this unfolds over 9 fantastic episodes. In our columns, the game had collected the very nice score of 17/20: “Sanitarium is certainly not perfect, however, its gloomy atmosphere and its unique story make it a flagship title and hoist it among the best titles of the genre. Sanitarium is not played, it is experienced.“

Read:  The jubilees of Elizabeth II: 1977, the antidote to the gloom

Released in 2003, Manhunt invites you to follow the character of Earl Cash in a game of extreme violence. The character is a death row inmate and the player must meet the expectations of the “Starkweather”, director of a snuff movie called “manhunt” which has our inmate as main protagonists as well as various gang members. In this infiltration-oriented title, the goal is to find a way to approach opponents without alerting them to execute them in a gruesome way. The more shocking it is, the more the director likes it, the more points the player earns. Despite the scandals surrounding the release, Rockstar’s game will have a sequel in 2007. The game will collect the average score of 13/20: “A hyper-violent infiltration game, Manhnunt suffers from serious shortcomings to cope with its gameplay model. Placed next to the baby of Io Interactive, the difference is obvious and relegates Manhunt to the rank of average game, to do for lack of better.“

In 2009, Atomic Games announced Six Days in Fallujah, a first-person tactical military shooter that was to be based on the events of the Second Battle of Fallujah between Iraqi guerrillas and United States armed forces in 2004. An event controversial for the use of white phosphorus bombs on the American side. Konami, publisher of the project, affirmed the will to propose above all “an entertaining experience“. But faced with the virulent reactions, the Japanese had ended up dropping the case, and the project was aborted. In 2021, the title resurfaced and got a facelift with a new developer, Highwire Games, and Victura, a publishing company and production company founded by former Atomic Games CEO Peter Tamte in 2016. Highwire includes Jaime Griesemer, Principal Designer of the original Halo and Destiny games, Marty O’Donnell, former Audio Director and Destiny, and Jared Noftle, ​​who co-founded Airtight Games.For the moment, the project has not given more news.

Released in 1995, the game Phantasmagoria caused controversy for its extreme violence. Newlywed couple Adrianne and Don have just acquired a mansion that is sadly completely haunted. Your mission: escape the various monsters that occupy this house. René André, RPR deputy for La Manche, then asked for a control to be put in place on the sale of violent video games, insisting on this game which ” traces the story of a husband possessed by a mad magician who murders his five wives in a particularly atrocious way before ending, after several rapes, scenes of torture, by impaling himself (Julien Lalu, 2018).

On February 14, 2022, developers from Italian studio LKA announced that the experience of its new psychological thriller, Martha is Dead, would be truncated for PlayStation gamers and spared on other media: “After more than four years of passion and hard work, LKA needs additional time to make these unplanned changes”. Martha is Dead recounts the journeys of Giulia, daughter of a high-ranking Nazi who discovers the corpse of her twin sister Martha in a lake. We quickly guess the tone given to the game during a metaphorical performance, when the heroine cuts up her sister’s face to make a mask. Martha is Dead forces you into dismemberment, disemboweling and child abuse. Naturally, the decision revived the debate on censorship: “if the images shock you: do not play them”, for example exclaimed one of our readers in reaction to the news.