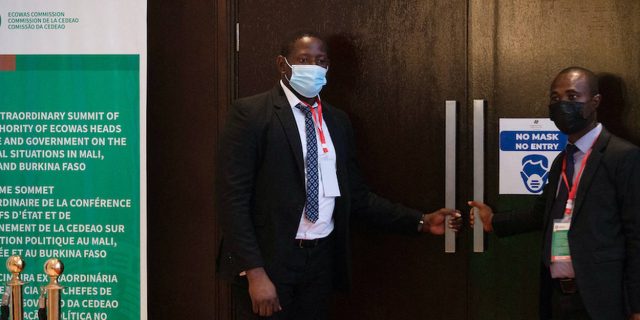 Ihe Economic Community of West African States (ECOWAS) on Friday maintained pressure on the ruling junta in Mali, where sanctions remain in place, and in Guinea and Burkina Faso, threatened with new sanctions. So far, the four coups in the region since 2020 have called for different responses from the international community and, in the front line, from ECOWAS, of which the three countries are members. Mali, Burkina Faso and Guinea, countries in the throes of political crises, but also security for the first two, have all three been the scene of military coups since August 2020. Mali has even experienced two putschs.

The stake of this summit which was held in Accra, Ghana, was important and the organization thus decided to maintain the heavy economic sanctions imposed on Mali on January 9, 2022, when the junta announced its intention to maintain several years at the head of the country, announcing that she would not organize elections at the end of February as initially planned.

ECOWAS “invites the transitional authorities (of Mali) to adhere to the recommended 12 to 16 month transition timetable” for the duration of the transition before civilians return to power.

In addition, the West African organization decided on Friday to sanction Guinea if it did not present an “acceptable timetable for the transition” before the end of April 2022, and Burkina Faso if it did not release former President Roch Marc. Christian Kaboré by March 31, 2022, according to the final communiqué of the meeting of ECOWAS Heads of State.

Read:  Rust: 8 years after its launch, the survival game is still a hit!

The organization specifies that in the event of non-compliance with its demands, it will impose sanctions on members of the government and the National Transitional Council (CNT). Burkina’s transitional authorities will also face “individual sanctions” if they fail to comply.

In September, shortly after the coup in Guinea and the dismissal of President Alpha Condé, ECOWAS had already decided to freeze the financial assets of members of the junta and their family members.

ECOWAS is pressuring ruling juntas to quickly return power to civilians. It suspended the three countries from its instances. And the sanctions in Mali have been maintained despite an order issued Thursday by the Court of Justice of the West African Economic and Monetary Union (UEMOA) requiring the suspension of the sanctions. They are also maintained despite the approach of Ramadan and the hope of a gesture of appeasement that would have affected trade and prices on the eve of a period of increased consumption. The WAEMU decision represented a rare success for the junta.

Read:  Restitution: Belgium gives the DRC the inventory of its heritage

The potential impact of these sanctions on a poor, landlocked country has sparked deep concern, but also widespread resentment, beyond Mali, against regional organizations.

ECOWAS shows its firmness after the failure of an agreement with the Malian junta on a timetable for the return of civilians to power in this country plunged for ten years in a deep security and political crisis. The ECOWAS mediator in the Malian crisis, Goodluck Jonathan, former president of Nigeria, left Bamako empty-handed. ECOWAS has, to date, requested the organization of elections within twelve to sixteen months in Mali. During the visit of the former president to the Malian capital, from March 18 to 20, the junta had indicated that it had reduced from four to two years the period deemed necessary by the junta to lead the country before returning power to the civilians.

For Guinea, where the military took power in September 2021, ECOWAS expressed “serious concerns” about the length of the transition, noting that “the six-month timetable for holding elections was not respected”.