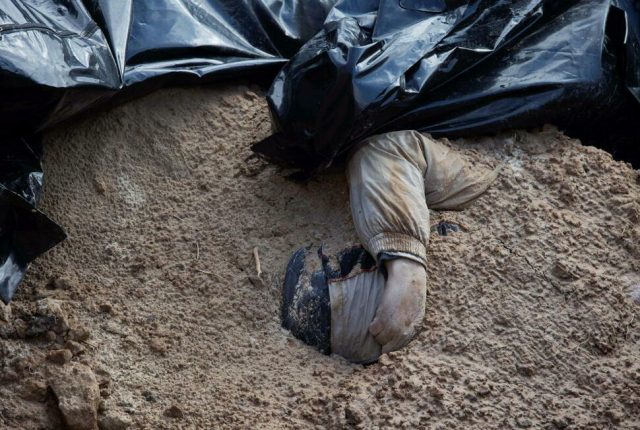 “Falling on corpses has become a daily occurrence. But I had never seen so many, in one place, until today…” confides the French photoreporter Raphaël Lafargue (Abaca Press), author of these images for Point and present in Ukraine since the beginning of the offensive. Taken in Boutcha, on the outskirts of kyiv, the day after the discovery, on Sunday April 3, of around 300 bodies of civilians – some of whom were tortured – these photographs tell of the horror of the Russian atrocities, brought to light after the withdrawal of their troops.

“Every day, when our fighters enter and retake territories, you see what is happening,” said Ukrainian President Volodymyr Zelensky, who came to meet, on Monday April 4, the mayor of the city Anatoliy Fedoruk (here photographed surrounded soldiers) and observe the human damage caused by the fighting, which he describes as “genocide”.

Here, a pit, dug behind the largest Orthodox church in the city, includes 57 corpses of civilians. There, those who littered, the day before, one of the main arteries of Boutcha. This quiet suburb in the northwest of the capital, whose name now symbolizes the atrocities of war.

“Everything is broken, annihilated, wherever the gaze arises…” comments Raphaël Lafargue. However, in the middle of this landscape of desolation – tanks and tanks burned, houses blown up – inhabitants are slowly reconnecting with life. Like these women, haggard, whose building was, until the departure of the troops, invested by the Russians.

“They had taken refuge, like a dozen other people, in the basement or in the nursery school which adjoins their building. But they were, above all, hostages. The Russians had settled here, because they knew that the Ukrainians would not dare to target this area where civilians still “resided”…” says the photographer, to whom the latter confided. “One of them, elderly, continues to spend most of these days, in the basement, on her bed, he adds. It’s very very dark. But she is afraid to come to the surface…”

Read:  Ukraine: "The situation resembles the oil shock of 1973" for Jacques Percebois, professor of economics

On the “surface”, bodies, like that of this young man, discovered near a construction site. Disfigured, with his hands tied and whose “story we may never know”. Makeshift graves. But also children, whose presence of the press “makes the animation” and arouses curiosity. Soldiers, who supply the inhabitants and desperately try to make them smile. And dogs – many of which roam the towns where the Russian army has struck – of which it is not known whether “the owners fled without them, or lost their lives”.