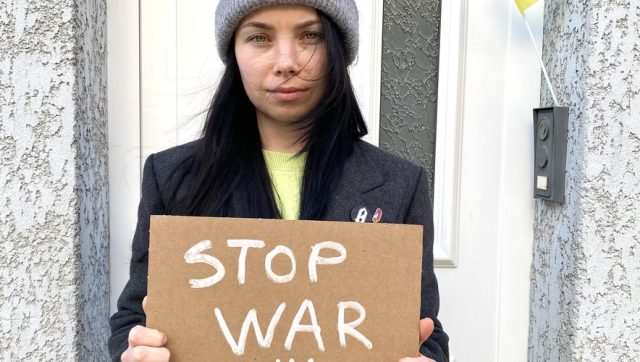 Masha Levchenko, 30, painter, born in Cherkassy in central Ukraine three hours from Kiev, on the banks of the Dnieper River, has lived in Port-La Nouvelle for seven years with her spouse Olivier Raynaud.

What psychological state are you in?

At the beginning of the week, one morning, everyone called me, all my friends woke me up to tell me that there was a war. Since then, I have not slept, my life has stopped. I follow the news all the time, I have my parents on video several times a day, and with my two younger brothers, we send audio text messages every two hours…

My two little brothers are in Kiev. They seek to leave the capital but for the moment, they cannot. On Thursday, all roads were blocked and there was no public transport. They want to go to Cherkassy where my parents live in central Ukraine. It’s a safer area than Kiev because the Russians are really targeting Kiev.

Are your parents safe?

They don’t panic. They continue to live. My mother is confident in her country and my father, who paints furniture, continues to go to work. On the streets in Cherkasy, people continue to walk their dogs. In this sector, there were shellings with a civilian killed. In particular, a Russian plane fell…

For a hundred years Russia has wanted to destroy, erase Ukrainian culture

Did you and your family expect an invasion from Russia?

We did not expect that. We were all surprised. Only, we now know that the Ukrainian army knew very well what was going to happen and knows perfectly the strategic targets targeted by Russia.

Do you believe the Ukrainian army capable of coping?

We rely heavily on our army. The men who compose it are of great mental strength. Our army is much stronger than a few years ago. We have soldiers in reserve. The situation is no longer the same as in 2014 when Russia annexed Crimea and Donbass.

What is the majority opinion in Ukraine regarding Russian actions?

In the 1930s Ukrainians were victims of mass murder, in the 1950s they still wanted to destroy our nation. But we Ukrainians love freedom, we don’t care about Russia, all we want is to be free and independent. The Donbass, for example, is Russian propaganda, I have many friends who had to leave the Donbass because they did not want to live under the Russian yoke.

When was the last time you returned to Ukraine?

Last summer, a few months ago. It was great ! Everyone spoke Ukrainian, the country was in great shape, we felt that people had much more confidence in our country. The economy was doing better, people were wearing Ukrainian clothes and were proud to be Ukrainians. There was a lot of hope, optimism.

Are the Ukrainians ready to defend their country with arms in hand?

There are volunteers to join our armed forces. The police distribute weapons to civilians, it is a reality. We know that molotov cocktails are ready. We won’t abandon our land like that…

Child, teenager, young adult, did you feel the Russian pressure?

Yes, of course, all TV channels were Russian speaking for example. Which was completely abnormal. I told you, they always wanted to destroy our culture.

Your view on Volodymyr Zelensky, the Ukrainian president?

He’s an honest man who arrived after decades of corruption, so he couldn’t do everything in two years… It’s not easy to change all that so quickly… People trust him , he loves Ukraine. Ukraine is no longer what it was under Russian influence. In 2014, during the Maidan revolution, the police were violent, hitting women, children… And the next day, millions of Ukrainians gathered to demonstrate in Maidan Square. To say, “Now that’s enough !”

How do you see the future?

You have to understand that we Ukrainians have freedom running through our veins. We are a bit like the French. We are former Cossacks, we have freedom in our blood. The Ukrainians will not let this happen.