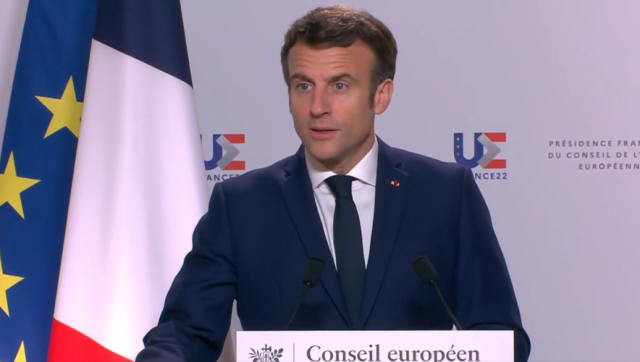 Emmanuel Macron spoke this Friday March 25 at the end of the European summit devoted to the situation in Ukraine. The leaders of the Twenty-Seven meeting in Brussels have given a mandate to the European Commission to make the common purchase of energy products and to think about a better dissociation of the prices of gas and electricity, declared Friday Emmanuel Macron. Here’s what to remember from his speech.

Emmanuel Macron spoke on Friday March 25 of the conclusion of a new European summit devoted to the situation in Ukraine. The French president sketched the contours of the adoption of the EU’s “strategic compass”, a white paper of the 27 which will define the EU’s orientations in terms of security and defense until 2030.

“The European Council yesterday endorsed its first white paper in the form of a work plan up to 2030, the so-called strategic compass,” he said. “We must develop a common military culture to have more autonomous capabilities and build the innovations that our armies need”, underlined Emmanuel Macron, adding: “We must be less dependent on non-Europeans”.

Lower the price of gas

On energy, “the very short-term objective is to control our supply and our prices”, declared Emmanuel Macron before embarking on an explanation of electricity prices indexed to those of gas. “The second major element on which the EU will work in the coming weeks is to be able to better disconnect the price of electricity from the price of gas”, he presented. “A real novelty” believes Emmanuel Macron.

“Group purchasing, the ability to define long contracts together, is the best instrument to bring down the price of our gas”, predicts Emmanuel Macron before warning, however, of a “supply risk for the fall and next winter. “We must therefore diversify and replenish our stocks”.

Finally, still on the question of gas, the latter presented a system of “price caps” to set energy prices in Europe.

He also denounced the shortcomings of the system in France aimed at maintaining prices in the country: “We decided on a shield, in Franco-French. We protect households as well as VSEs-SMEs. It is a mechanism of protection and intervention but it is very expensive. The government protects the consumer but the taxpayer pays”.

On the risks linked to the arrival of a food shortage, particularly concerning wheat and more broadly cereals, Emmanuel Macron worried that “26 countries”, mainly located in Africa and the Middle East, were dependent “on more 50% of their supply “in Russian or Ukrainian cereals”. Emmanuel Macron evokes a “Food and Agriculture Resilience Mission” (mission of resilience in terms of food and agriculture). ‘This will include trying to raise all the barriers of market dysfunctions and to solicit all the stocks that are made”, notes the Head of State. “The second pillar is to produce more”.

The axes of the European response will be presented shortly.

“I hope this mistake will not happen again”

On the question of the cartoon disseminated by the Russian Embassy, ​​Emmanuel Macron declared that “these publications are unacceptable”. “We believe in dialogue but in respect”, commented the President of the Republic who added: “I hope that this fault will not happen again. We demanded it”.

The cartoon depicted Europe as a sick man lying on a bed receiving injections of “Russophobia”, “neo-Nazism” and “sanctions” from “Doctor EuroReich” and “Doctor Empire of Lies”. It has since been removed.

An exceptional military operation for Mariupol

Finally, the Head of State showed himself to be deeply affected by the situation in Mariupol and declared with the approval of the 27 that a large-scale humanitarian mission was going to be put in place quickly. This operation will be done “in conjunction with Turkey and Greece, to evacuate all those who want to leave Mariupol. We will organize things in the best possible conditions”.

“Our own teams are coordinating and we will then negotiate with the Russian side. I hope to be able to engage as many stakeholders as possible in this operation. We are putting ourselves in a position to do so in the very next few days. I would have 48-72 hours maximum a new discussion with President (Vladimir) Putin to settle the details, “he added.

Tens of thousands of residents of Mariupol, in southeastern Ukraine, have been without water and electricity for days in a city reduced to ruins.