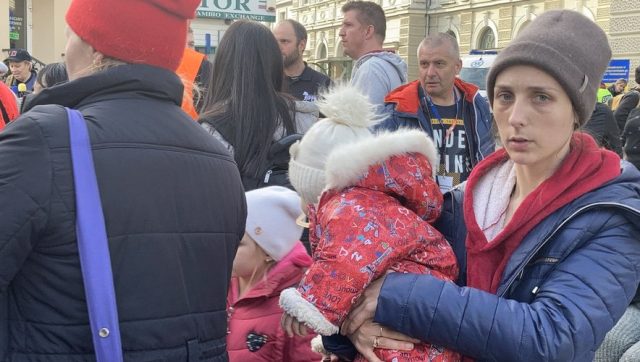 Report at Przemysl station, a border town where all the refugees flock by train and bus.

It is the point of arrival of refugees at the Polish border along which up to 50,000 Ukrainians are thronging each day to flee the intensified Russian bombardments. In the border town of Przemysl, 60,000 inhabitants, life goes on. No military on the horizon, no distinctive sound of a war that is raging a few dozen kilometers away.

And the refugees would blend indiscriminately into the mass of the population if there weren’t these signs: you come across small, exclusively female groups in the streets with children, suitcases and backpacks in hand. The exodus is diffuse but everywhere.

At Przemysl central station, the scenes of daily life are striking. The trains arrive loaded with refugees arriving directly from Ukraine. The families meet there, haggard faces, lost looks.

“Planes bombed our apartment, we just arrived here. We are told to come and leave, but we don’t know where to go”, testifies Victoria, her eyes sad and ringed, from which shines through a cold anger but also a pride. She is with her sister and her 11-year-old daughter, wisely stuck to her mother.

The men of the family “fight in Odessa”, she slips, watching for the arrival of a bus that can take them to a former Tesco shopping center, requisitioned to serve as a transit center housing 700 people. Local authorities, overwhelmed by waves of arrivals, take care of each refugee and ensure that they stay no longer than 24 hours.

But where to go? “I have acquaintances in Germany and I can work, I can help”, launches Natalia, another mother and her two young daughters, diaphanous face, bags under the eyes, who also fled death.

On the forecourt of the station, a snack truck offers sandwiches. In the hall, the charities offer hot soups and take care of registering each new family. Telephone operators distribute free SIM cards on the station platform and the city’s firefighters, a map of Poland laid out on a large table, help and advise confused arrivals. For everyone, there is not a second to lose.

In this anthill, where the international media follow one another, volunteers from all over Europe also lend a hand. Here is Pierre-Vincent, 63, in the middle of the crowd, holding up a cardboard sign From Montpellier France and scribbled words in Ukrainian.

This fast food trader took his van from Hérault, “with medicine and dry food”, to help the Ukrainian people. He also proposes to bring people back to France. He is going to carpool two women to Vezoul where they have contacts and he is ready to welcome “a mother and a child of my daughter’s age so that everyone is happy”, he begins to explain to us.

Read:  Sète: the Secours populaire opens a niche of French lessons for Ukrainians

But three policemen intervene, intrigued by his sign. Control. Pimps and other touts have already cracked down. Pierre-Vincent, in order, returns, a bit scalded but still eager to open his house to exiles. In front of the station, faced with so much despair, Anton Guesde, from the SOS Montpellier-Ukraine association, who came with the humanitarian convoy from Occitanie, decides to stay in Poland, whose language he masters, to swell the ranks of volunteers.

“Here people come from the war, they have lost everything, they are in distress, they don’t know where to go, all because of a ruthless despot he throws. I’m staying because I’m tired of seeing crying women and kids sleeping outside.”

According to the United Nations, 3.3 million refugees have fled Ukraine since the beginning of the Russian invasion, 90% women and children, men aged 18 to 60 are called upon to fight.

In addition, more than 6.5 million people have been internally displaced.