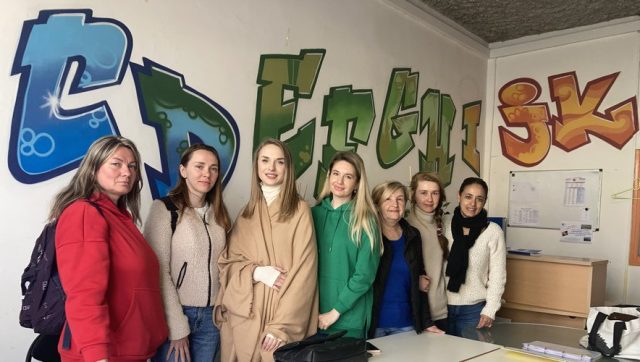 Their names are Sveltana, Anastasia, Lena… These Ukrainian refugees follow the literacy classes of the Sète charity association with the main objective of finding work.

Yannick joined the Secours Populaire volunteer team in charge of literacy two weeks ago. She came as an observer and that day four Ukrainian women wishing to learn French came to the antenna of the Rhine-and-Danube quay. The neo-Sétoise, who has already supervised female literacy workshops in another region, has since taken care of this group twice a week. That day, there were six of them, aged 25 to 66, and as soon as they arrived, they took out notebooks, pens and fluorescent markers.

Refugees in Sète with host families or with friends, they arrived here in dispersed order thanks to various networks driven out by the war which is devastating their country without necessarily knowing each other. Some were accompanied by their child and, for Svetlana by her mother Valentina, but all have family, sometimes a husband who stayed in the country.

Read:  Bruno Tertrais – Is immigration the cause of the populist vote?

The bridges, the boats, the crescents

Here, they are safe, discover the singularities of the city, the culinary specialties, the walks. Lesia, who arrived by train ten days ago, was surprised by the number of boats and bridges. “Magnificent!” says this mother of a 12-year-old boy who was a secretary in Ukraine. Valentina was not used to keeping her shoes at home. Svetlana, his sporty tall daughter, cites the shops being closed on Sundays while Lena, a yoga teacher, found “the French nice”. “What do you like ?” Yannick asks them. Almost unanimous response: “The croissants!”

Apart from Anastasia who did three years of French at school, they are all great beginners but, over the course of the lessons, they have made progress and are beginning to relax. “We had a meeting on Monday, says Yannick. We decided that they will stay together. It will be more reassuring for them.” The host does not address the situation in Ukraine and no personal questions are asked. Nor are we talking about religion and politics. However, we will learn that all of them have as their main objective to find a job.

When the dialogue gets stuck, we use English, the common language. Yannick asks them to introduce themselves with very simple sentences and teaches them the conjugation of auxiliaries. Laughter bursts out. The workshop ends with a gymnastics sequence led by Svetlana who, in Ukraine, gave karate lessons. Next time, Yannick will teach them how to make an appointment with the doctor and then take them shopping at the market.