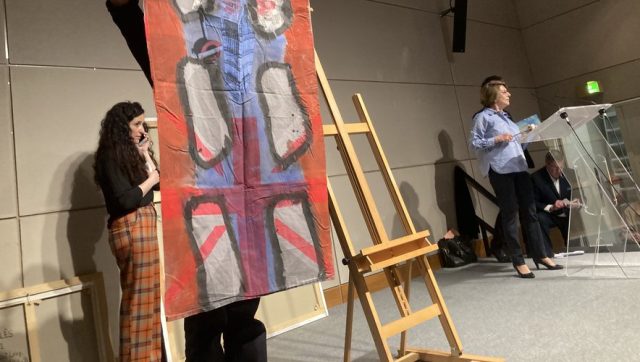 Forty artists had donated works for a sale to benefit Ukraine.

The day of solidarity organized by the city of Nîmes for the benefit of Ukrainian refugees began this Saturday with an auction at Carré d’art, in front of a packed conference room, populated by art lovers but also people who participated for the first time at auction.

Forty-two were presented and the sale brought in a total of €48,570, which will be entirely donated to the Red Cross. “We will respond to the immense needs expressed by the ICRC, which has been there since 2004, and by the Ukrainian Red Cross”recalls an official of the association.

The highlight of the sale, a Claude Viallat which recently served as a poster for the British Screens festival, climbed to €16,500. “It was the work that seemed to me the most appropriate since it has been seen in recent weeks on all the lollipops”, smiles the artist. A landscape by Vincent Bioulès, who signs the next poster for the feria, was sold for 9,500 euros to a buyer on the phone.

Read:  GTA, The Medium, eFootball… The biggest disappointments of 2021

Several works exceeded 1,000 euros, including a large canvas by Didier Biffano, paintings by Jacques Gorde or Jean-Pierre Guiot, a photo by Jean Dieuzaide, a caricature by Eddie Pons or a work on paper by Jorge Colomina, bought by the mayor of Nîmes, Jean-Paul Fournier. Almost all the pieces presented have found takers.

“I am delighted, I would never have expected so much”welcomes Sophie Roulle, culture assistant, who welcomes the mobilization of the culture department to organize the event in an emergency.

“I am very happy, continues Me Françoise Küsel, auctioneer. The artists have been incredibly generous in giving but also in accepting to be presented below their real price.” She shared the hammer with her partner, Pierre Champion and with the two young auctioneers called upon to take over from them Aurore Illy and Franck Puaux, in a much more relaxed atmosphere than usual in the auction room…

Read:  Street Fighter 6: Capcom celebrates 35 years of the saga, the new opus soon to be announced?