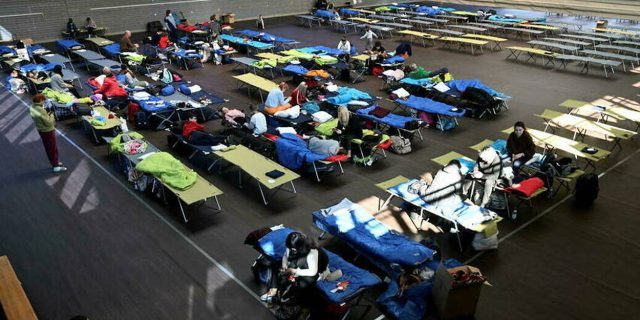 ILast Monday, arriving in Brussels, Annalena Baerbock dropped a little bombshell before entering the Foreign Affairs Council. “We are living through the greatest humanitarian crisis after the Second World War. Millions of people are on the run. We have over 3 million refugees. We have to assume that there will be 8-10 million refugees in the coming weeks. And we can only manage this situation together in Europe and with our partners around the world. The German Foreign Minister is also counting on Joe Biden, visiting Brussels on Thursday, to take his share of Ukrainian refugees to the United States. Japan could also be solicited, at least financially, during the G7 summit (under the German presidency) which is held just after the NATO summit and before the European Council.

Ten million Ukrainians displaced in Europe in a few weeks? A colossal movement, because it means that in a very short and sudden period of time the Ukrainian population welcomed into the EU will have equaled or exceeded the population of 19 member countries out of 27. Ukrainian refugees will be as numerous as the Czechs , the Greeks, the Swedes, the Portuguese (four countries with between 10 and 11 million inhabitants). The image is striking: the whole of Portugal is emptying and migrating…

Ensure the school follow-up of the children

On Wednesday, the Commission announced that 3.5 million Ukrainians had already joined the neighboring countries, which will very quickly be overwhelmed despite all goodwill. It is as if Croatia had completely emptied itself and moved to its neighbours. Ukrainian refugees are mainly – 80% – women and children. Within Ukraine itself, the fighting has already displaced 6.5 million people. If the ceasefire does not come quickly, there are so many candidates to leave.

The European Union activated, for the first time, the 2001 Temporary Protection Directive, which offers (for one year renewable) rapid and comprehensive assistance to Ukrainian refugees. They have the right to work in the EU, to housing, to medical care and – very importantly – to education. “This is probably the most urgent and concrete task in front of us: the children of Ukraine should go to school now,” said European Commissioner and Greek Vice-President of the Commission on Wednesday. Margaritis Schinas, anxious to give children a semblance of normal life after the psychological shock suffered by many of them.

The Commission relies on the School Education Gateway portal to house Ukrainian educational material within the European schools. Luckily (if one can say so), the pandemic has prepared the ground by dematerializing a number of online courses, thus facilitating the migration of education in the Ukrainian language… The EU must, on the other hand, ensure that the Ukrainian schoolchildren and students have the means to connect to online courses. Ukrainian teachers are invited to join the eTwinning community.

The Member States will all be confronted with taking charge of the refugees. The Commission intends to distribute the money from the Care and EU React funds (10 billion euros, i.e. part of the European recovery plan) between the 27. A pre-financing envelope of 3.5 billion euros has been proposed by the Commission, which must be approved by the Council and Parliament. It would be reserved for countries that received flows of refugees corresponding to 1% and more of its population between February 24 and March 23. This makes it possible to increase by 34% the funds of the neighboring countries of Ukraine. This is not the case of France which can always count on its normal envelope: 848 million euros for 2022. Outside the EU, small Moldova (2.6 million inhabitants) is allocated 150 million euros to cope.

The fear of a new Covid-19 wave

Ukrainian patients fleeing the war will also be taken care of. “Medical hubs” will carry out the first checks to direct them to European hospitals. The Covid-19 pandemic should not saturate the beds again… This is the great risk of the next wave. For now, Member States and the Commission have identified 10,000 beds available for emergencies. “ECDC monitors the health situation on the ground and has published guidelines for the prevention and control of infectious diseases,” the Commission adds. “Unfortunately, Ukraine is a poorly vaccinated country, which is a challenge to be met,” underlines Margaritis Schinas. Vaccine stocks should be sufficient and, if the need arises, the joint purchase of vaccines will be reactivated for requesting States.

Read:  Covid-19: for Christmas, Biden praises the "immense courage" of the Americans

With regard to access to the labor market, Ukrainian refugees have not always had time, in the rush to flee, to bring their diplomas or any document attesting to their skills. The Commission will quickly establish equivalences between the European education systems and those of the Ukrainians to facilitate the immediate recognition of national qualifications. Here too, digital comes to the rescue via a “talent pool” (an initiative that worked in Portugal and Romania) which will allow refugees to showcase their skills online.

Guards against the trafficking of unaccompanied minors

Finally, with regard to housing, for the moment, the outpouring of generosity in Europe has made it possible to offer a roof and a host family to a good number of refugees, but, in the long term, this is not sustainable. . The Commission wants to launch “a new initiative for ‘safe housing’”. Targeted funding will help Europeans who make their homes available. The “asylum, migration and integration” fund and cohesion policy funds will be mobilized to strengthen public reception systems. In the longer term, social housing will be provided for families and single people by channeling European regional development funds. The European Social Fund, for its part, can support in particular disabled people, separated children and the elderly.

The vulnerability of minors is an important subject. ” Unaccompanied minors, children separated from their parents and orphans must be immediately registered and cared for by child protection services to prevent them from being victims of trafficking and abuse,” warns the commissioner. Dubravka Šuica, Vice-President in charge of Democracy and Demography. Mafia prostitution networks are on the lookout. There too, it is necessary to prevent this type of company. “National coordinators”, within the framework of the European Child Guarantee, must play a pilot role so that national and regional actors ensure that unaccompanied minors exposed to trafficking and abduction are referred to orphanages. The Commission ensures that specific standard operating procedures are in place for transfers of unaccompanied minors so that they are not left unattended…