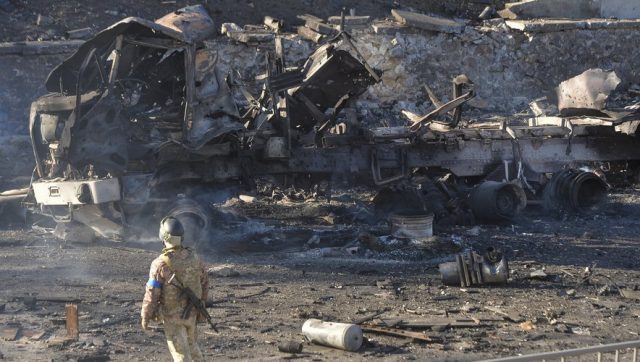 On the third day of the invasion led by Russian President Vladimir Putin, heavy fighting is taking place in Kiev. The Ukrainian army says it destroyed a column of five Russian vehicles, including a tank. A high residential building was hit by a missile strike, according to the authorities, who did not give a toll.

In the capital, which has become a ghost town, the curfew has been tightened. Anyone on the street between 5 p.m. and 8 a.m. will be treated as an enemy, the mayor warned. The metro is at a standstill and now serves as an anti-aircraft “refuge” for the inhabitants.

Ukrainian forces also reported “violent” fighting 30 km southwest of the capital where the Russians “are trying to land paratroopers”.

Russia for its part did not mention any offensive on Kiev, only reporting cruise missile attacks on military infrastructure, advances in the East, where the army supports the separatists of the Donetsk and Lugansk territories, and in the south where Russian forces entered from the Crimean peninsula, annexed in 2014.

The Ukrainian government has reported 198 civilians killed, including three children, and more than a thousand wounded since the start of this invasion. Dozens of soldiers also lost their lives.

Russia does not give any assessment of its losses. For its part, Poland announced on Saturday that 100,000 Ukrainians had already crossed its borders to seek refuge there.

Western weapons on the way

“We have stood our ground and are successfully repelling enemy attacks. Fighting continues in many towns and regions of the country, but (…) it is our army that controls Kiev and key towns around the capital (.. .) We broke their plan,” Ukrainian President Volodomyr Zelensky said in a video posted on his Facebook page.

The Kremlin accused Kiev of having scuppered a truce the day before by “refusing” “negotiations”. Zelensky, who swears he will stay in the capital, also said, after a conversation with his French counterpart Emmanuel Macron, that “weapons and equipment from our partners are on their way to Ukraine”.

Russia’s media regulator has ordered national media to remove from their content any reference to civilians killed by the Russian military in Ukraine as well as the terms ‘invasion’, ‘offensive’ or ‘declaration of war’ .

Read:  Ukraine: the G7 united in the face of a war "which will cause catastrophic suffering and loss of life"

Zelensky called on Germany and Hungary to have the “courage” to approve Russia’s exclusion from the Swift interbank system, which is being considered by the European Union. After France, Italy promised to support such a sanction.

A boat diverted to Boulogne-sur-Mer

A commercial boat transporting vehicles to Saint-Petersburg, suspected of belonging to a Russian company targeted by EU sanctions, was diverted to Boulogne-sur-Mer (north-west of France).

Poland announced on Saturday that it was refusing to play in the World Cup qualifier against Russia. Moscow has decided to close its airspace to planes linked to Bulgaria, Poland and the Czech Republic, after a similar decision taken by these three countries against Russian airlines.

Demonstrations of solidarity with Ukraine against the Russian invasion are multiplying across the world, from Argentina to Georgia via Italy.