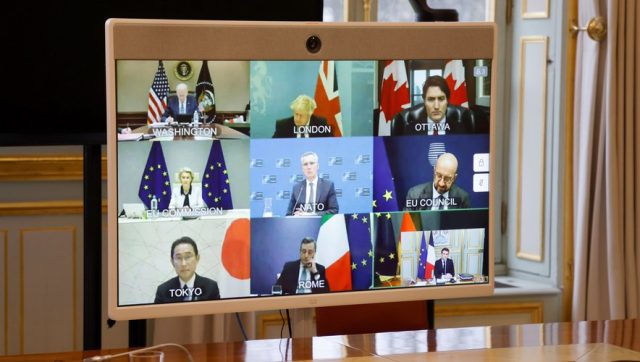 US President Joe Biden met Thursday morning with his G7 counterparts to decide on tougher sanctions against Russia, after Vladimir Putin unleashed what Joe Biden called “a premeditated war” against Ukraine.

Joe Biden, who spoke late Wednesday with Ukrainian President Volodimir Zelensky, also convened his national security council earlier in the day Thursday to discuss the situation in that country, according to a White House official. The US President is scheduled to speak publicly on Ukraine at 12:30 p.m. EST.

The virtual meeting between the United States and its allies is underway, the White House said, and the G7 is preparing to respond to what the American president called on Wednesday evening “an unprovoked and unjustified attack by Russian military forces” on Ukraine.

“President (Vladimir) Putin has chosen a premeditated war that will cause catastrophic human suffering and loss,” said Joe Biden. This statement came shortly after Vladimir Putin announced the launch of a military operation in eastern Ukraine.

Read:  For Christmas, a bank pays 155 million euros into 75,000 accounts ... before realizing its mistake

A NATO meeting on Friday morning

The “other consequences that will be imposed by the United States, its allies and partners on Russia” are expected later Thursday, according to the White House. Washington will also coordinate with its NATO allies to “ensure a strong and united response that deters any aggression against the alliance,” the US president said.

The Alliance must also meet urgently on Friday, after announcing Thursday that it was strengthening the presence of its troops on its eastern flank and putting hundreds of planes and ships on alert.