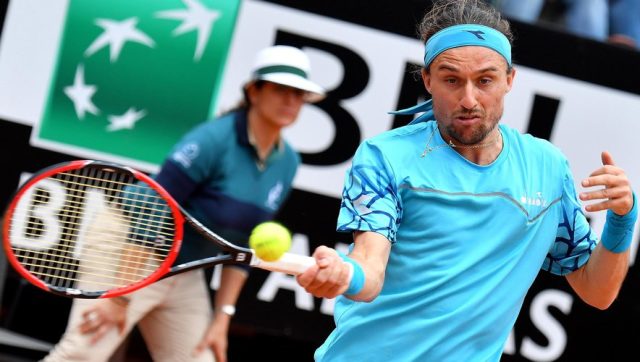 Former Ukrainian tennis player Alexandr Dolgopolov said in an interview on Monday March 21 with RTL that the organizers of Roland-Garros “lack courage” in allowing Russian players to participate in the tournament and called for “banning Russia of the world of tennis.

The French Tennis Federation (FFT) indicated last Wednesday that the door to the Roland-Garros tournament (May 22-June 5) would not be closed for Russian players, including Daniil Medvedev (world No. 2), and Belarusians.

“They (the organizers of Roland-Garros) lack courage, they especially do not want to assume possible consequences. Frankly it is not enough to say that we are against the war. It is a war against our nation , which affects our civilians,” said the 33-year-old Ukrainian, who returned to kyiv in mid-March to take up arms and defend his country.

Dolgopolov, former winner of three tournaments on the ATP circuit, said he was too affected by the situation in Ukraine to think of the Parisian Grand Slam. “Seriously worrying about Roland-Garros today is a joke. It’s not (more) important than the lives of thousands of people,” he said.

An individual athlete is only banned if he has been selected by his country. It’s the framework, we stick to it

“Strict neutrality is imposed on Russian and Belarusian players (…) declared the director general of the FFT Amélie Oudéa-Castéra on Wednesday during a press conference. “We remain on the principle of all the ministries of Sports of the European Union and of all the key countries around us”.

“We only ban an individual athlete if he has been selected by his country. This is the framework, we stick to it”, she had justified. “For now,” added FFT President Gilles Moretton. In addition to the organizers of Roland-Garros, Aleksandr Dolgopolov also challenged the leaders of world tennis.

“I said it to the ATP: tennis has a very loose posture today. I think the tennis world makes decisions that lack courage. Russia must be banned from what is managed by the free world. Because today, to say: I am against war, It is insufficient. Their athletes must condemn their government, recognize that these are mass murders,” he insisted.

The former player thus invited Russian tennis players to dissociate themselves from their government and to firmly affirm their opposition to the war. “They’re good guys, I know them personally. I’m pretty sure they’re against this war. But if they take a neutral stance, like I am against war it’s as if they were telling us Leave me, I live my life in my corner, I don’t want to be involved, I just want to play tennis. This position is not tenable today, sorry,” he said.

Read:  The portrait of Marilyn Monroe on a blue background by Andy Warhol sold in 4 minutes for a monumental sum