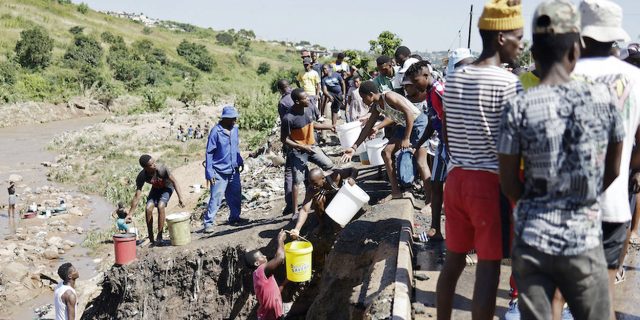 Lhe assessment of the catastrophic floods in South Africa increased on Thursday 14 April. “A total number of 40,723 people have been affected. Unfortunately, 341 deaths have been recorded,” said Sihle Zikalala, Minister of Kwazulu-Natal Province, at a press conference. While other rainstorms are expected in the coming days, a state of disaster has been declared. The worst is to be feared, indeed, the death toll is expected to rise, as dozens of people, including entire families, are still missing, officials said.

“The intense rescue phase is largely over. Currently, our job is mainly to recover bodies,” Travis Trower, who leads rescue teams, told AFP. Originally from the region, he confessed to witnessing “the worst disaster in 20 years” in the province of Kwazulu-Natal.

What is the damage on site?

The rains, which reached levels not seen for more than 60 years, washed away bridges, roads and isolated a large part of the region bordering the Indian Ocean. More than 250 schools have been affected, thousands of homes destroyed. According to numerous testimonies collected on the spot, men and women drowned, children and babies died buried in landslides. More than a hundred bodies were deposited overnight from Wednesday to Thursday at the Phoenix morgue, in the suburbs of Durban.

President @CyrilRamaphosa visits flood-stricken parts of KwaZulu-Natal to offer support to affected communities and assess the response of government and civil society to this critical situation. #KZNFloods pic.twitter.com/ZEssD4Pjaw

Durban is the third largest city in the country with a population of 3.5 million. It is home to one of the largest ports in the southern hemisphere. Gateway to trade in southern Africa, neighboring countries such as Botswana, Zambia, Zimbabwe, the Democratic Republic of Congo (DRC), Malawi, Lesotho and Eswatini depend on it for the majority of their imports. and exports.

Read:  General Dupont: "The Chinese are not our enemies, but they isolate themselves"

Precarious situation for the inhabitants

In this already dramatic context, sporadic demonstrations broke out to call for help. The city of Durban called in a press release “for patience”, the relief operations being slowed down “due to the extent of the damage on the roads”. Cleared with diggers, some axes have been reopened but most roads are still inaccessible, strewn with debris or drowned in brownish water. The authorities have asked people to avoid all contact with this potentially “contaminated” water as much as possible.

Particularly in townships, such as Amaoti in northern Durban, where most homes are made of corrugated iron sheets or wooden planks. In some areas, water and electricity have been cut for four days and everything is missing. Hence the reported looting scenes. CCTV footage shared on social media showed people snatching up goods from supermarket shelves. Local authorities have appealed for donations of non-perishable food items, water bottles and anything that could keep you warm. About 20 emergency shelters have been opened, welcoming more than 2,100 homeless people, according to the authorities.

President @CyrilRamaphosa visits flood-stricken parts of KwaZulu-Natal to offer support to affected communities and assess the response of government and civil society to this critical situation. #KZNFloods pic.twitter.com/rUp8jgpXgN

How to explain the violence of these floods? While some southern African countries are regularly plagued by deadly storms during the hurricane season from November to April, South Africa is generally spared these extreme weather events. But this time around, it looks like the elements have been unleashed. The weather department attributed the heavy rainfall to the La Nina weather phenomenon, a low-pressure system called a cut-off low, which is associated with widespread instability in the atmosphere and can lead to long periods of rainfall. The forecast announces thunderstorms and the risk of localized flooding for the Easter weekend. These new bad weather should also affect the neighboring provinces of the Free State, in the center and the Eastern Cape, in the southeast. On Wednesday, President Cyril Ramaphosa was on hand to see the damage and listen to the survivors. He lamented “a catastrophe of enormous proportions that is part of climate change”, before adding, “it tells us that climate change is serious here”.

Read:  Vladimir Putin victim of an assassination attempt: what we know of the alleged facts