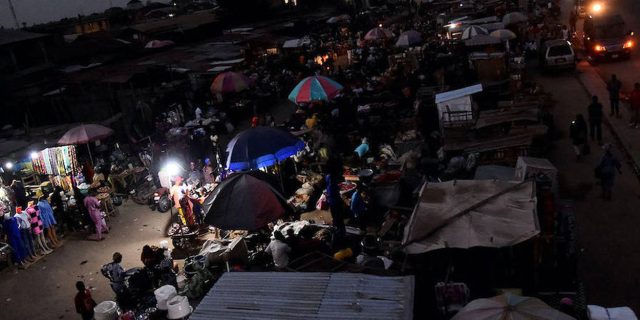 Ihe picture painted by field testimonies and expert information is already worrying. For several days, the most populous country in Africa, which is also the continent’s largest economy and largest oil producer, has been out of power throughout its territory. Nigeria is not self-sufficient in electricity, its infrastructure is obsolete. Although people are used to using oil-powered generators, the war in Ukraine has caused fuel prices to soar, as well as demand. Result: the country is plunged into a serious energy and economic crisis.

On the ground, entrepreneurs, merchants, traders or even companies are fighting to work. Since mid-March, the local press has reported that several local airlines have had to cancel flights due to a fuel shortage.

Agence France Presse reports the testimony of Damy Idowu, who for eight years struggled to keep his small hair salon open in a commercial district of Lagos despite runaway inflation, two recessions and the pandemic of coronavirus. But, last week, the entrepreneur had to resolve to close shop, like many others in Nigeria – the African giant facing one of the worst energy crises in recent years. “To function, my living room needs electricity and I cannot afford to use the generator because of diesel prices,” he told our colleagues at AFP.

Same observation in Kano, an industrial city in the north of the country, many factories are prevented from running at full speed. Some owners have even stopped their production line. This is the case of Umar Sani Marshall, owner of Marshall Biscuits, a confectionery factory that has stopped production in the past two weeks. “The current situation is beyond comprehension,” he told AFP, deploring production costs “preventing any profitability”. A significant shortfall which comes at the worst time for this confectionery producer, just before the month of Ramadan, when demand is usually very strong.

In Nigeria, Africa’s top oil producer, power outages are common as decrepit infrastructure often fails to deliver electricity to residents. With a rapidly growing population of 210 million, the country has experienced a boom in commercial and industrial activities over the past decade that are largely dependent on electricity. Although the sector was privatized in 2013, over the years the demand for electricity has exceeded generation, transmission and distribution capacities. And the few reforms undertaken by the government have not been enough to solve the problems.

Read:  War in Ukraine: Algerian gas, a godsend for Europe?

According to the state-owned Transmission Company of Nigeria (TCN), generating companies are attributing the current outages to poor gas supply, faulty generating units and maintenance. But corruption, endemic in many sectors in Nigeria, is also singled out.

On Sunday, civil society group SERAP urged President Buhari to investigate suspicions of corruption, as some 11 trillion naira (24 billion euros) has been spent on the electricity sector since 1999. According to them, it is “the staggering amounts of public funds allegedly stolen over the years from the power sector that are having catastrophic effects on the lives of millions of Nigerians”. According to local media, the country experienced 206 blackouts between 2010 and 2019, due to weak grid and poor maintenance. Power shortages are costing Nigeria about $29 billion, or some 2% of GDP, according to the World Bank.

Usually in Nigeria, those who can use gasoline or diesel generators to light their homes when the power goes out. But Nigerians who cannot afford it find themselves in the dark. The price of diesel has tripled in recent days, from 225 naira per liter (50 euro cents) to almost 800 naira (almost 1.60 euro). A consequence of the Russian invasion in Ukraine, which sent crude oil prices soaring on world markets.

Some main streets in Lagos are no longer lit at night, causing car accidents, while shopkeepers now illuminate their wares with light from their mobile phones.

It is an understatement to say that the situation is serious, this Wednesday, March 23, a serious fire damaged one of the main bridges in Lagos, destroying dozens of businesses. One of the market managers told AFP that the fire was caused by an electrical surge. “We haven’t had electricity for 6 days. When they put the light back on around 2 a.m., there was a spark that caused the fire, ”she insisted, showing AFP wires and cables burned at the scene.

This energy crisis is hitting Nigeria’s economy hard, and comes on top of weeks of gasoline shortages noted last month, before the Russian offensive in Ukraine, and which authorities say were caused by the import of adulterated gasoline by four traders. The sale of oil accounts for 90% of Nigeria’s export earnings. While crude-producing countries have been reaping additional revenue since the Ukraine crisis pushed world oil prices above $100 a barrel, Nigerians are still saddled with yet another shortage.

Because despite all the oil it extracts, Nigeria imports the majority of its fuel because its four refineries are not working, or well below their capacity, thus exposing itself to frequent supply problems. Since the 1970s, the Nigerian state has subsidized fuel to keep pump prices artificially low. A system that siphons off billions of dollars from public coffers every year. But this is one of the measures most popular with Nigerians and no government has taken the political risk of putting an end to it. The Minister of Finance had mentioned last year the abolition of fuel subsidies by the end of June, as recommended by the IMF and the World Bank. But in January, the ministers backtracked to buy social peace.

Nigerian President Muhammadu Buhari may have apologized for fuel shortages and summoned his energy minister to discuss power shortages, but will that be enough? Less than a year from the presidential election, the opposition party, the People’s Democratic Party (PDP), has warned that this energy crisis could lead to popular protests.