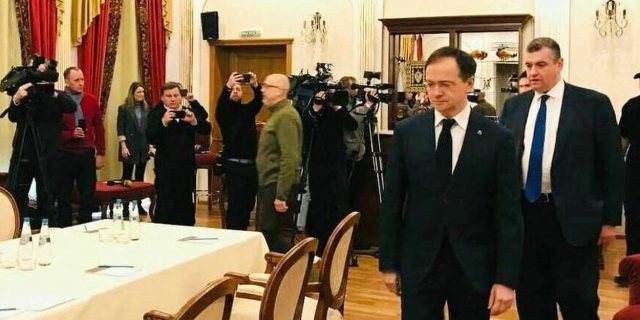 11:10 p.m. – The new round of Russian-Ukrainian negotiations will take place in Istanbul

The Russian and Ukrainian delegations will meet in Istanbul, Turkey, for a new round of negotiations, the Turkish presidency announced in a press release on Sunday evening. During a telephone conversation on Sunday evening, “(Turkish) President Recep Tayyip Erdogan and Russian Head of State (Vladimir) Putin agreed on the holding of the next round of negotiations between the Russian and Ukrainian delegations. in Istanbul”, affirmed the Turkish presidency. The two heads of state discussed the negotiation process and Recep Tayyip Erdogan told his Russian counterpart that Turkey was ready to make “any necessary contribution” to establish a ceasefire in Ukraine and “improve the humanitarian condition in the region”. Earlier in the day, one of the Ukrainian negotiators, David Arakhamia, had announced that a new round of negotiations would take place from Monday to Wednesday in Turkey, without specifying the place of the meeting.

Former cyclist Tony Martin auctioned his silver medal on Saturday, won in the time trial at the 2012 London Games, to help Ukrainian children following the Russian invasion, announced the German champion on social networks. “I have decided to donate my London 2012 Olympic silver medal to raise funds for RTL-Wir ​​helfen kindern (the RTL-We help children foundation),” the champion cyclist wrote in an Instagram post with photos of him with his silver medal released Sunday morning. “It’s not easy to part with the biggest trophy I could win in my career, but, considering the fact that millions of people have lost almost everything, it’s something I really want to do. “, explained the four-time world time trial champion, who retired from sport last year.

Ukrainian President Volodymyr Zelensky said on Sunday that several Russian businessmen had offered to donate money to help Ukraine, including to support its army. During a videoconference interview with several Russian media, Mr. Zelensky said he had received “signals” from several Russian businessmen, including billionaire Roman Abramovich, a close friend of Vladimir Putin targeted by Union sanctions. European and UK. “We’ve had signals from him and a few other businessmen, suggesting: We can help somehow, can we do something?” he said. “Some said they were ready to help rebuild the country after the war. We are ready to transfer our affairs to Ukraine, we live in England or somewhere in Switzerland, we want it. But how can you avoid being on the sanctions list?“Some people do not want to give their names and say that they want to help our army, while being citizens of the Russian Federation,” he continued.

The question of Ukraine’s “neutrality”, one of the central points of negotiations with Russia to end the conflict, is “studied in depth”, Ukrainian President Volodymyr Zelensky assured Sunday in an interview with the media. Russians. “This point of the negotiations (…) is under discussion, it is studied in depth,” he said in this online interview, broadcast on the Telegram channel of the Ukrainian presidential administration.

6:05 p.m. – Ukraine fears aggravation in Mariupol and the east of the country

kyiv fears a worsening of the situation in Mariupol and eastern Ukraine after Moscow announced on Friday that it would “concentrate its efforts on the liberation of Donbass”, said an adviser to the Ukrainian presidency. This Russian announcement could lead to a “worsening” of the situation around Mariupol, a strategic port in the south-east of the country besieged since the end of February, and in the whole of the Donbass mining basin, says Oleksiï Arestovych in a video message posted on the presidency’s Telegram account.

French Foreign Minister Jean-Yves Le Drian calls for continued dialogue with Russian President Vladimir Putin until he realizes the “price to pay” for his invasion of Ukraine and want to negotiate.

David Arakhamia, one of the Ukrainian negotiators, announces that Russian and Ukrainian delegations will meet from Monday March 28 in Turkey for a new round of face-to-face negotiations.

Russia may want to establish a Korean-style separation in Ukraine, an official from the Ukrainian Ministry of Defense believes. “After having failed to take kyiv and overthrow the Ukrainian government, (Russian President Vladimir) Putin is changing operational orientation” by focusing on “the south and the east” of the country, estimates on Facebook Kyrylo Boudanov, head of the military information.

4:33 p.m. – Establish the results of the bombing of the Mariupol theater, an almost impossible mission, according to an elected official

More than 10 days after the bombardment of the Mariupol theater, the fate of the hundreds of civilians who had taken refuge there is still unknown: faulty communications and the absence of local authorities make the mission almost impossible, explains an elected municipal official from this port in southeastern Ukraine under siege by Russian forces. The Mariupol town hall, citing witnesses, said on Friday it feared that around 300 people died in the bombardment of the theater where hundreds of people had taken shelter. Ukrainian President Volodymyr Zelensky said on March 18 that more than 130 people had been saved, without estimating the number of dead.

3:21 p.m. – Half of Ukrainians ready to fight, according to a survey

Nearly half of Ukrainians aged 18 to 55 say they are ready to participate directly in the fighting against the Russian invasion, according to a survey by European researchers. For men, this share rises to around 70%, while it is around 30% for women, according to this opinion poll, the results of which were published by the Oslo Peace Research Institute (Prio). with the support of local pollster Info Sapiens.

3:05 p.m. – The head of Ukrainian diplomacy calls for a boycott of Auchan supermarkets

The Ukrainian Minister of Foreign Affairs calls for a boycott of Auchan stores after the French group announced that it wanted to maintain its activities in Russia, arguing in particular for the need to support the purchasing power of Russians. “Apparently the job losses in Russia are greater than the deaths in Ukraine,” wrote Dmytro Kouleba on Twitter. “If Auchan ignores the 139 Ukrainian children murdered during this month of Russian invasion, let’s ignore Auchan and all its products”, he adds, calling for a “boycott” of the Auchan, Leroy Merlin and Decathlon stores, all owned by the Mulliez family association.

Apparently, job losses in Russia are more important than the loss of life in Ukraine. If Auchan ignores 139 Ukrainian children murdered during this month of Russian invasion, let us ignore Auchan and all their products. Boycott @AUCHAN_France @alcampo @Leroymerlinfr @Decathlon pic.twitter.com/ZuLqbYwVgs