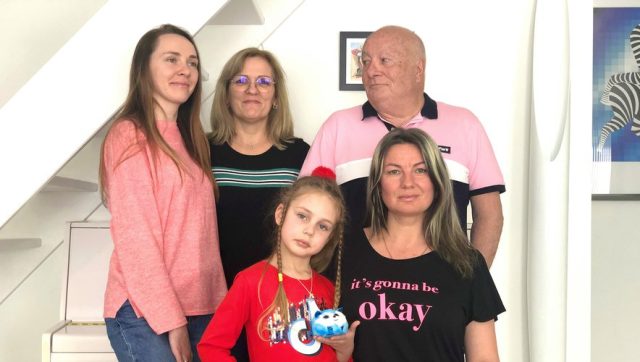 Elena, Yanina and her daughter Darina fled Kharkiv under a rain of bombs. By chance on a grueling and uncertain journey, they landed with a couple from Sète.

“When I heard the rocket fire from my bed, I thought it was fireworks“, says Elena. It took the bombings to get closer to her neighborhood in Kharkov as the days went by, to realize that her life was urgently threatened.

The young woman then spent several days between cellars and makeshift shelters, observing, on her smartphone, the good tips for surviving, “Stand in a hallway, for example, to avoid shattered windows“. Yanina, too, lived in Kharkiv. Together with her daughter, Darina, they survived the same wandering.

The two Kharkivians barely knew each other, but their husbands are close friends. Together in an emergency, the families make a decision as heartbreaking as it is inevitable: women and children will leave Ukraine. Following a rather tortuous route to circumvent the roads where the tanks fire on sight, their husbands lead them to the Polish border, then turn around. Men are forbidden to leave the country.

Read:  Presidential 2022: when the international crisis reshuffles the electoral cards

Souvenir photo of the camp

Elena, Yanina and little Darina have no destination in mind. By dint of navigating by sight, they land in a center for refugees in Warsaw, of which Yanina keeps curious souvenir photos on her smartphone. Her daughter poses there in a vast hangar, in the middle of an ocean of cots.

In search of a lasting solution, the young women go through social networks and come across an Instagram post, which announces that families are ready to welcome Ukrainians. Somewhere in a town in the south of France, called Sète. The post comes from a certain Svetlana, whose cousins ​​live on the Singular Island. In the pages of the Midi Libre, a few weeks earlier, the latter had launched an appeal to the Sétois ready to welcome refugees from Ukraine.

After a few days of hesitation, all three embark on a humanitarian flight which connects Lublin, a city in eastern Poland, to Nice. At the Côte d’Azur airport, their hosts are waiting for them with a sign: they have traveled from Sète to pick them up.

Read:  Sète: roses for Ukraine to buy throughout the weekend

Direction the upper district, at Elisabeth and Roland. To this couple, it seemed obvious, from the start of the conflict, to offer two of the rooms in their house. Through Svetlana, her Sète cousins ​​and Instagram, their proposal reached the young refugees.

In her new room, toys were waiting for Darina. The little girl, from the height of her five years, understood that she will not find her family. They are lost under the rubble.