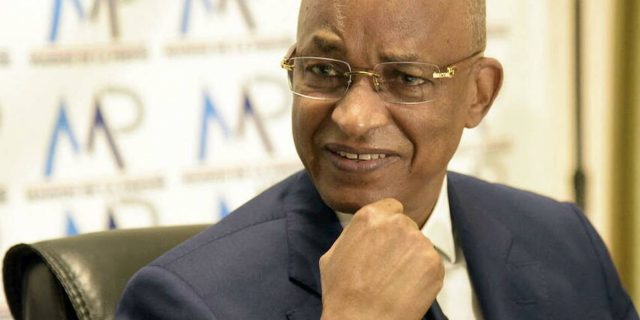 TA three-time candidate for the presidential election (2010, 2015 and 2020), Cellou Dalein Diallo occupies the forefront of the Guinean political scene, where he emerged as Prime Minister of President Lassana Konté from 2004 to 2006. President of the Union of Democratic Forces of Guinea, one of the main political parties in the country, he agreed to share his thoughts on what Guinea is currently going through.

The Africa Point: Six months after the coup that ousted President Alpha Condé, where is Guinea today?

Cellou Dalein Diallo: It must first be remembered that when the coup took place on September 5, 2021, the vast majority of the people of Guinea approved of it. Indeed, Alpha Condé was exercising an illegal and illegitimate third term following the constitutional coup of March 22 and the electoral hold-up of October 18, 2020. Guineans and the political class approved the coup and asked the international community to support the junta because its takeover speech reassured us. She pledged to put an end to the dysfunction of institutions, the instrumentalization of justice and to organize the rapid return to constitutional order following inclusive, free and transparent elections.

Six months later, we are rather disappointed because, until now, we have no visibility. It is not known when the transition will end. No date has been given by the junta, which has excluded the political class from the management of this transition. We called for a political dialogue to jointly define the content of the transition, its duration, the status of the electoral management body, how to have a file that faithfully reflects the Guinean electorate, but we are not listened to.

So, today, it is the absence of visibility and the refusal of any dialogue that characterizes the situation. This is a source of conflict because when you don’t have visibility and you can’t be associated with defining the content and the duration of the transition, you are somewhat frustrated. In a context marked by the dissolution of the Assembly and the constitution, a context where the president has been deposed, there is no longer any legitimacy. Only the consensus resulting from political dialogue should guide public action. Unfortunately, this dialogue does not exist. And the junta decides alone without involving the actors of civil society and the political world.

One imagines that political forces and civil society do not sit idly by?

Read:  Macron and Europe: does European sovereignty have a future?

Several political dialogues in Guinea were held in Guinea. A dialogue framework exists which can be updated. It is the CNRD which decides, it is the government which implements the policies decided by the CNRD, it is the CNT which legislates, it is the political actors who take part in the elections and it is civil society which is observer but also whistleblower.

Alongside that, there are the technical and financial partners who support the government in organizing the elections and who want to ensure that the conditions for a free and transparent ballot are met. They are also used to participating in political dialogue.

We believe that this framework can effectively help to move forward, to avoid the conflicts that may arise and to establish a dialogue. We also suggest that there is a facilitator from ECOWAS, the African Union or the United Nations to help the Guineans to get along. There is a sufficiently deep crisis of internal confidence that sometimes the presence of an external mediator can help to iron out differences and avoid unnecessary conflicts.

Have you contacted them? And if so, have these structures reacted?

We made a declaration signed by 58 parties. We first noted that there were risks of deviation from this transition, in particular an instrumentalization of justice through attempts to eliminate and exclude political leaders, either in the campaign to recover public property, or in the actions of the Court for the repression of economic and financial crimes. We feel that there is sometimes a desire to harass political leaders who undoubtedly have recognized mobilization capacities and sufficient electoral weight to be major players in the competition if it takes place.

We have therefore denounced this and asked that the framework for dialogue be put in place, that there also be a jurisdiction to deal with human crimes (there have been many) in particular with the bloody repression that has been inflicted on those who were demonstrating against the third term, for example. A Court has been set up for the repression of economic and financial crimes. There must also be jurisdiction to deal with human crimes because we cannot continue to support impunity. Money is important and economic crimes must be punished, but human life is precious and must be protected. Those who have lost loved ones must have the right to truth, justice and reparation.

How does the CNRD react to this?

The CNRD has written letters to coalitions inviting them to meet the Minister of Territorial Administration to discuss the framework for dialogue. We believe that this dialogue framework should bring together delegations from the six institutions: the CNRD, the government, the CNT, the political parties, civil society and the technical and financial partners.

Read:  Netflix: The return of a cult horror saga in February 2022

It is good that this political dialogue is led by a mediator, a facilitator from ECOWAS as is the case for Mali with former Nigerian President Goodluck Jonathan. There is a crisis in Guinea, since there was a coup d’etat, and there is a need for a facilitator, especially since the crisis of confidence is so deep that we need help. to iron out our differences.

ECOWAS had, of course, mechanically condemned the coup. She also demanded that the return to constitutional order be organized within six months. Here we are. For the moment, it has not yet drawn the consequences of the non-implementation of the decision it had taken. I think she will soon do it even if I don’t know what she will say afterwards since we continue to deplore the absence of a timetable. In any case, so far, the authorities have not filed anything regarding the duration of the transition.

What are the risks if the situation persists?

In the Declaration that the 58 parties have signed and disseminated, it is said that we reserve the right to use all legal means for the satisfaction of its legitimate demands, including the resumption of demonstrations in the public square.

What thought comes to mind when you see what is happening in Mali or Chad?

I deplore the fact that in Guinea we want to exclude the political class. I note that in Mali the political parties are members of the transitional government. Even the Prime Minister comes from the political class. There is also an ECOWAS mediator there who is trying to help the Malians to come to an agreement. On the side of Chad, I must welcome the initiative to invite even the rebel movements to dialogue. The Chadian Prime Minister was in Doha a few days ago to meet the rebel movements and encourage them to lay down their arms and come around the negotiating table. I think it is important. I do not understand that in Guinea the legally approved political parties, which are well established and which participate in all the elections, are excluded from the management of the transition and are not even consulted through an inclusive dialogue which would make it possible to prevent conflicts and to find consensus which could have guided the public action of the government as well as of the CNRD and the CNT.

Are you optimistic for the future in Guinea?

I must admit that I am a bit skeptical because for six months nothing has changed. We therefore wonder about the will of the junta. Is it willing to return power to civilians within a reasonable time? Does she want to stay as long as possible? If she is not a candidate, will she not have a candidate? Guineans are currently wondering. They don’t have the answers yet.