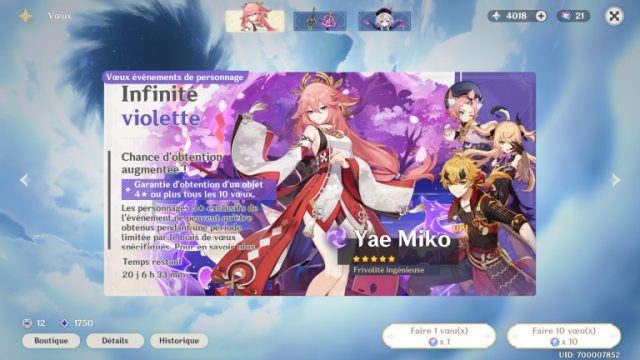 news tip Genshin Impact, Yae Miko: should we summon her? Analysis and guide to play it well

Yae Miko, the latest open-world character from MiHoYo, is coming to Genshin Impact! Of the Electro type, she has a rather original gameplay… Find out if it’s worth summoning her to integrate her into your team.

Version 2.5 of Genshin Impact has just arrived! And this one comes with a new character, Yae Miko. Does she deserve your prime gems? Will you summon him? Remember to collect the 600 primo-gems that await you and see together how to optimize it and if it can be useful to you in Genshin Impact.

The Guuji Yae of Narukami Shrine is also the editorial manager of the Yae Chamber. Unimaginable intelligence and cunning are hidden beneath her graceful appearance.

Evocation of the Yakan: Devastating Sakura

For Yae, boring tasks that can be fixed by chasing spirits don’t need to be done personally. Moves quickly, leaving behind devastating sakura. Devastating Sakura The following characteristics apply:

The legend of “kitsunetsuki”, or possession by a Kitsune, is one of Inazuma’s folk tales. Among them, that of the Celestial Kitsune is considered special, overwhelming enemies in Narukami Shrine as a lightning bolt that descends, inflicting area Electro DMG. Using this skill, Yae Miko unseals nearby devastating sakura to destroy their outer forms and transform them into lightning bolts of tenko descending from the sky, inflicting area Electro DMG. Each devastating sakura destroyed in this way triggers a lightning bolt.

Meditation of a yako

Sacred Shadow of the Sanctuary

Each elemental mastery point Yae Miko has increases the DMG of devastating sakura by 0.15%

Offering of the yakan

Yelp under the moon

Devastating sakura start at Lv.2 and can go up to Lv.4, and their attack range increases by 60%.

When the lightning bolt from a Devastating Sakura hits an enemy, all nearby party members gain 20% Electro DMG for 5s.

Which set and which stats to favor?

In terms of its artifacts, two choices are available to you:

For weapons, we necessarily recommend the weapon of his banner, the Kagura’s Truth. An excellent choice for her is the solar beadthe weapon of Battle pass.

In terms of statistics, here are the main ones on the 3 pieces to have:

For statistics in general, prefer the CRIT DMG, ATK% and CRIT RATEin addition to Energy Refill (ideally try to be at 150%)

Should Yae Miko be summoned?

Yae is a character who is not bad, she is even quite correct. It is not necessarily difficult to equip, and can largely do the job.

However, Yae Miko is not an essential character. She is better than Fischl of course, but the latter is still decent enough not to have to be replaced, especially since the characters who apply the electro effect are not the rarest on Genshin Impact.

If you want to make it work, you will need 120%+ Energy Recharge (Ultimate ability at 90 energy + lack of means to make particles), and ideally a battery for it (Shogun Raiden for example). We are waiting to see in the medium term what it will give in an optimized team. So everything will be played on your love of the character. It can be useful to you and make your team shine, especially if you are lacking on the Electro side.