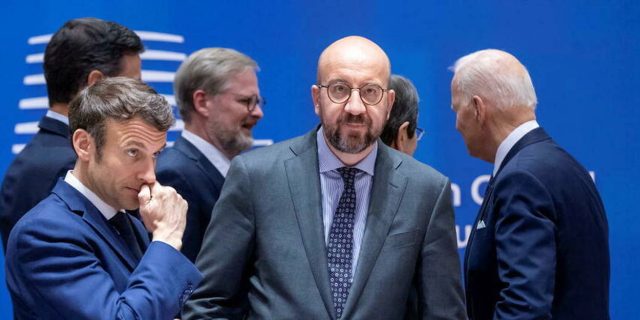 AThen the war in Ukraine sent energy prices skyrocketing all over Europe, EU member states reached a consensus on Friday 25 March to give the European Commission a mandate to carry out joint gas purchases, on the model of orders for anti-Covid vaccines. The 27 and the Commission “will urgently work together on voluntary purchases of gas, liquefied natural gas (LNG) and hydrogen” by taking advantage of the economic weight of the EU to benefit from advantageous prices, according to the conclusions of the Brussels summit.

“Group purchasing, the ability to define long-term contracts together, is the best instrument to bring down prices,” argued French President Emmanuel Macron during a press conference. “The Commission can aggregate up to 75% of gas purchases” by renegotiating existing contracts or concluding new ones, said Emmanuel Macron, whose country holds the half-yearly presidency of the EU.

Read:  Omicron variant: Japan cuts itself off from the world

The German Chancellor, Olaf Scholz, for his part stressed that participation in the mechanism would be voluntary, unlike the mechanism for joint purchases of vaccines which excluded orders outside the Commission. “We agreed on the fact that this is an opportunity to cooperate voluntarily for gas purchases,” he observed to the press. “Of course, when you look at specific cases, it can be complicated, very complicated, because there are private companies all over Europe”, which are committed to contracts, “which buy gas on their behalf and intend to continue in the future,” he explained.

Anxious to isolate Moscow and deprive Russia of sources of revenue after its invasion of Ukraine, Brussels wants to cut European purchases of Russian gas by two-thirds this year. By grouping together requests, the Commission also intends to facilitate contacts with international suppliers in order to diversify the sources of supply for Europeans. The European Commission has entered into negotiations with the main producing countries (Norway, Qatar, Algeria) and announced on Friday an agreement with the United States for them to increase their deliveries of liquefied natural gas to the EU.

The EU’s joint purchasing platform “will also be open to Western Balkan countries”, as well as to the three states linked to the EU by association agreements (Moldova, Ukraine, Georgia), specify the conclusions Summit.

Read:  Call of Duty Warzone: a surprising bug would announce a long-requested feature