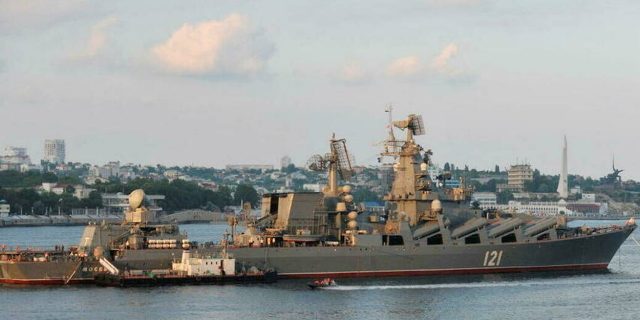 IThis is one of Russia’s biggest setbacks and a major humiliation. the Moscow, Russian flagship in the Black Sea, sank Thursday after being hit by a Ukrainian missile according to kyiv, due to an accidental fire according to Moscow, a major setback raising fears of an escalation of the conflict as Russia accuses Ukraine of bombing villages on its soil.

“When towing the cruiser Moskva towards the port of destination, the ship lost stability due to hull damage sustained in the fire following the detonation of ammunition. In rough sea conditions, the ship sank,” the Russian Defense Ministry said Thursday evening. He had previously indicated that the fire on board was “contained” and that the cruiser “kept its buoyancy”, while claiming to investigate the causes of the disaster.

A “hard blow” for the Russian fleet

The loss of this command ship is “a severe blow” to the Russian fleet in the region, Pentagon spokesman John Kirby said Thursday, with “consequences on their combat capabilities”, the ship being a ” key element in their efforts to establish naval dominance in the Black Sea”. the Moskva “provided air cover for the other vessels during their operations, in particular the bombardment of the coast and the landing maneuvers”, detailed for his part the spokesman for the regional military administration of Odessa Sergei Bratchouk, on Telegram. Ukrainian President Volodymyr Zelensky hit the nail on the head in his evening ritual video message by referring to Ukrainians as “those who showed that Russian ships can only go to the bottom”.

During the night from Wednesday to Thursday, the Russian Ministry of Defense had admitted that this 186-meter-long missile ship had been “severely damaged” by a fire which caused the explosion of ammunition and that its crew of more than of 500 men had been evacuated. The Ukrainian governor of the Odessa region, Maxim Marchenko, affirmed for his part that the Ukrainian armed forces had struck the Moskva with Ukrainian-made Neptune cruise missiles, inflicting “significant damage”.

The use of nuclear power?

Military setbacks in Ukraine could prompt Russian President Vladimir Putin to resort to a tactical or low-power nuclear weapon in that country, William Burns, the head of the CIA, the main US intelligence agency, warned on Thursday. But “we haven’t really seen any concrete signs like military deployments or measures that could heighten our concerns,” he insisted.

Translating into words the level of extreme hostility reached in this conflict, as much as the gravity of the atrocities attributed to Russian forces, the Ukrainian Parliament voted on Thursday a resolution qualifying the Russian offensive as “genocide”. “Russia’s actions aim to systematically and consistently destroy the Ukrainian people, to deprive them of the right to self-determination and independent development,” the text explains.

In return, Russia accused Ukraine of bombing Russian border villages. The Russian investigative committee says two Ukrainian helicopters ‘equipped with heavy weapons’ entered Russia and carried out ‘at least six strikes on apartment buildings in the village of Klimovo’, in the Bryansk region . Seven people, including a baby, were injured “to varying degrees”, according to these Russian accusations, the validity of which is impossible to verify independently.

Read:  Easter holidays: you no longer need to be vaccinated to go to Morocco… on this condition

Ukraine’s National Security and Defense Council rejected the claims, accusing Russian intelligence of carrying out “terrorist attacks” in the border region to fuel “anti-Ukrainian hysteria”. Russia, whose announced massive offensive in the Donbass has still not started and which is struggling to take full control of Mariupol, a strategic port in the Sea of ​​Azov, has threatened to strike “centres of decision-making in Kyiv.

The ship that took part in the attack on Serpents’ Island

The cruiser Moskva had participated in the first days of the invasion in an attack against Serpents’ Island, located in the Black Sea, near the Romanian border, during which 19 Ukrainian sailors had been captured. They had subsequently been exchanged for Russian prisoners. Commissioned in 1983 as Slavathe cruiser was later renamed Moskva. Equipped with sixteen P-1000 Vulcan anti-ship missile launchers as well as a variety of anti-submarine and anti-aircraft weapons, it was assigned in the second half of 2015 to the eastern Mediterranean to protect the Russian air base at Hmeimim, in Syria, according to the Tass agency.

Ukrainian presidential adviser Oleksiy Arestovych also quipped that the Moskva was the famous “Russian military ship” which, at the start of the war, summoned a handful of Ukrainian soldiers stationed on a small island in the Black Sea to surrender: “Russian military ship, go fuck you! The recording of this exchange had gone around the world and served as a leitmotif for the Ukrainian resistance, even appearing on placards during demonstrations of support abroad.