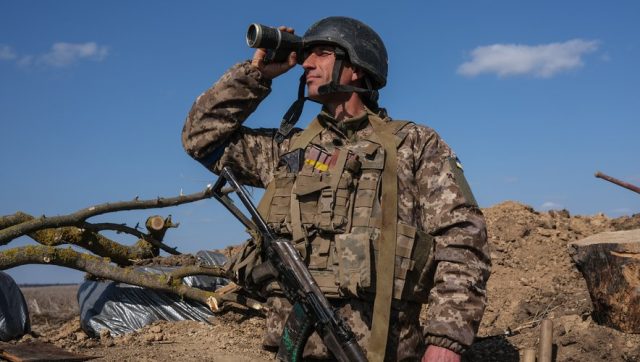 The Russian army announced on Friday that it had essentially completed the first phase of its military operation in Ukraine and that it would now focus on a complete “liberation” of the eastern region of Donbass.

This announcement, which surprised many observers and seems to be a downward revision by Moscow of its military objectives, comes a month and a day after the start of the massive assault launched against Ukraine by Russian troops on three main axes, the Donbass in the east, the Crimea in the south and the north towards Kyiv. The offensive came up against fierce resistance from Ukrainian forces.

Donbass is the region of eastern Ukraine made up of the “oblasts” (administrative region) of Luhansk and Donetsk, partly populated by Russian speakers, where Moscow recognized the independence of the two self-proclaimed separatist republics of the same name just before the beginning of his intervention on February 24.

The “release“of the whole Donbasswithin the limits of its administrative borders, delimited to the west by the regions of Kharkiv, Dnipropetrovsk and Zaporizhya, was according to the Russian Ministry of Defense quoted by Interfax one of the starting options of the Russian “special operation”, the the other being the conquest of the whole Ukrainian territory.

The Russian army reinforced on this territory

“The main objectives of the first phase of the operation have generally been achieved,” said General Sergey Roudskoy, Deputy Chief of Staff, in a speech.

“The combat capabilities of the Ukrainian Armed Forces have been significantly reduced, which … allows us to focus our main efforts on the main goal, the liberation of Donbass,” he added.

The announcement of this apparent refocusing of Moscow’s military objectives comes as the front lines have hardly moved for days near the major cities besieged by the Russian army, including Kharkiv, Chernihiv and Mykolaiv, and while Ukrainian forces even seem to have regained the upper hand east of Kyiv.

A senior diplomatic source in Moscow said the Defense Ministry announcement was a face-saving move and could be a prelude to a reduction in Russian operations.

“Their war objectives were much broader than Donbass, and left their forces divided with poorly coordinated attacks on multiple fronts by ill-prepared troops,” she said.

However, she noted the always “extremist” rhetoric of Russian President Vladimir Putin. “We need to see more evidence on the ground,” added this diplomatic source.

In Washington, a senior Pentagon official felt that this new priority displayed by Moscow could be a way of weighing on its talks with Kyiv and cutting off the Ukrainian forces concentrated on the Donbass front from the rest of the country.

Vladimir Putin presented the invasion of Ukraine as a “special military operation” aimed at demilitarizing and “denazifying” the country, fallacious pretexts according to Kyiv and the West, according to whom Moscow’s real objective was to overthrow the Ukrainian government.

Read:  May 9 in Russia: Ukraine, tribute, missile launcher... what to remember from Vladimir Putin's speech

Russia also demands that Ukraine accept the annexation of the Crimean peninsula by Moscow in 2014 and recognize the independence of Donbass, where pro-Russian separatists have been fighting the Ukrainian army since the same date.

The Ukrainian authorities say they are ready to negotiate to end the war but refuse to give in to “ultimatums”.

Sergei Rudskoy explained that Russia had initially considered limiting its operation to the Donbass region but chose to extend it to all of Ukraine in order to weaken its military capabilities and prevent Kyiv from sending reinforcements to the country. ‘Is.

The Russian army had not ruled out taking cities, but with its tasks now complete, “our forces and resources will be focused on the priority: the complete liberation of Donbass”, he continued.

The Russian general also announced that 1,351 Russian soldiers had been killed and 3,825 others injured in a month of intervention in Ukraine.

This assessment, the second only provided by the Russian authorities since the beginning of the conflict, is much lower than that advanced by NATO and the Ukrainian authorities, who say they have inflicted very heavy losses on the invading forces.