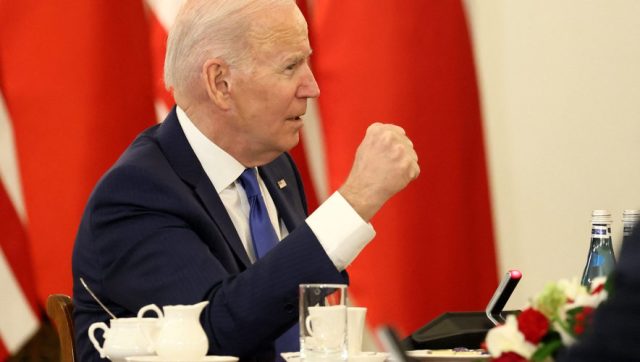 US President Joe Biden, present in Poland, spoke on Saturday in Warsaw with Ukrainian government officials as part of a visit to Poland intended to show US support for NATO’s eastern flank after the Russian invasion in Ukraine.

US President Joe Biden called his Russian counterpart Vladimir Putin a “butcher” this Saturday, March 26. He said he was not sure that Russia had changed its strategy in the war in Ukraine after Moscow’s announcement to focus on the complete “liberation” of Donbass. “I’m not sure Russia did it,” the White House chief said in response to a question about Moscow’s shift in strategy.

The Russian army announced on Friday that it had essentially completed the first phase of its military operation in Ukraine and that it would now focus on a complete “liberation” of the eastern Ukrainian region of Donbass. In the Donbass, made up of the “oblasts” (administrative regions) of Luhansk and Donetsk, partly populated by Russian speakers, the two self-proclaimed separatist republics were recognized by Russia as independent before the start of its intervention on February 24.

Read:  Increase in natural disasters: "The world is financing its own destruction", warns the UN

The head of Ukrainian diplomacy, for his part, told the press that Kyiv had received additional security and defense commitments from the United States. “President Biden said that what happens in Ukraine would change the history of the 21st centuryand we will work together to ensure that this change is in our favor, in favor of Ukraine, in favor of the democratic world”, he added later, in an interview with Ukrainian national television. .

Ukraine is not a member of NATO and the United States fears being drawn into a direct confrontation with Russia. Washington has however pledged to defend every square centimeter of the territory of NATO countries while the war in Ukraine, presented by Russia as a “special operation”, is on the border of some of the member states of this alliance.

Read:  War in Ukraine: sanctions in sport, an effective tool against Russia

A speech, presented as important by Joe Biden’s teams, must be delivered by the American president during the day. According to the White House, Joe Biden “will highlight the united efforts of the free world in support of the people of Ukraine, hold Russia accountable for their brutal war, and champion a future rooted in democratic principles.”

After three days of emergency meetings with the allies of the G7, the European Council and NATO, as well as a visit to American soldiers deployed in Poland, Joe Biden also met on Saturday with Polish President Andrzej Duda. Poland wants to see even more US troops deployed on its soil.