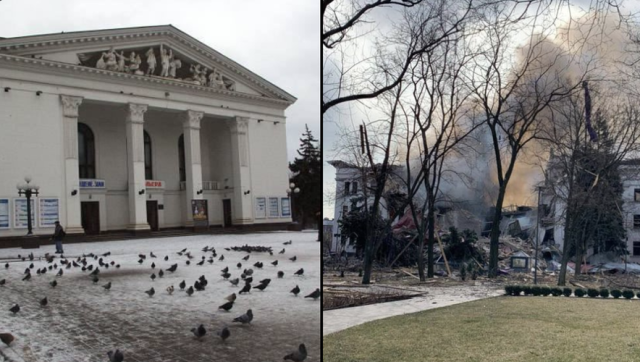 The Ukrainian authorities announced on Wednesday March 16 the destruction by an air attack of the Mariupol theater. The day after the attack, images of the destroyed building circulated. But no report is announced, while a thousand civilians had taken refuge there.

Images of the partially destroyed Mariupol theater are multiplying on social networks, while the world holds its breath awaiting a provisional assessment of the number of victims. In the port city of eastern Ukraine, the authorities accuse the Russian army of a targeted bombardment on the building this Wednesday, March 16.

Multiple reports that Russian forces dropped a bomb on Mariupol drama theater where (at least until yesterday) hundreds of people were taking refuge. If confirmed refugees were still inside, this would be potentially the worst civilian harm incident and an undisputable war crime. pic.twitter.com/sDfhHULLCM

A thousand civilian refugees in the theater

“Russia deliberately destroyed the drama theatre, where hundreds of people are housed,” accuses the mayor of the city. According to observers, nearly a thousand civilians had taken refuge in the theater. On videos shot a few days ago in the building, you can see many Ukrainian refugees, many of them women and children.

“It is impossible to find the words to describe the level of cynicism and cruelty with which the Russian invaders are annihilating the peaceful inhabitants”, denounced the mayor of Mariupol.

The American company Maxar Technology, which has provided satellite images since the start of the conflict, released an aerial photo showing the theater before its destruction. On the front and on the back of the building, one can see the words “children” drawn in large letters and in Russian.

The word “CHILDREN” had been written in giant letters visible from the sky (in Russian дети) in front and behind the Mariupol theater bombed by Russia, according to satellite images from March 14. The theater housed civilians, according to kyiv, no report for the moment
(\ud83d\udcf7@Maxar) pic.twitter.com/E9hZJxt3rX

According to the Ukrainian authorities, the Mariupol theater was hit by aerial bombardment in its center. On the first images broadcast this Thursday morning, we can see the building totally gutted. The emergency services announced that access to the theater was currently very complicated.

For its part, Russia has once again accused the Ukrainian nationalist Azov battalion of being behind the destruction of the Mariupol theater.