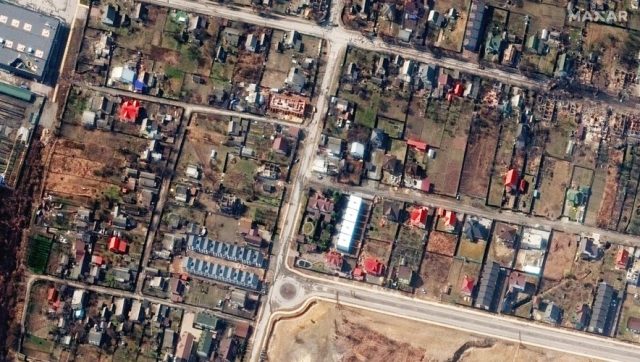 To follow news related to the Russian invasion of Ukraine on Tuesday, April 5, which marks the 41st day of the conflict.

– A Russian strike detonates a tank of nitric acid in Roubizhné, the inhabitants called upon to confine themselves

A Russian strike blew up a nitric acid tank in Rubizhne located in the Luhansk region. The inhabitants are called upon to confine themselves.

This trip will take place “upstream of the #StandUpForUkraine donors’ conference on Saturday in Warsaw”, said spokesperson Eric Mamer on Twitter, referring to this fundraising event organized by Ursula Von der Leyen and the Prime Minister. Canadian Justin Trudeau as part of the international “Stand Up for Ukraine” campaign.

– For Zelensky, talks with Russia are the only option

Ukrainian President Volodymyr Zelensky said on Tuesday (April 5th) that holding talks with Russia was the “only option” for Ukraine, even if such talks now constitute a “challenge”.

Even if the atrocities committed, according to him, by the Russian forces in Bucha are unforgivable, Ukraine and Russia must still take the difficult path of continuing the talks, he judged during an interview with Ukrainian journalists broadcast on television.

“For each of us, myself included, it’s a real challenge even to consider the possibility of negotiations,” Volodymyr Zelensky said in an interview with Ukrainian journalists broadcast on Ukrainian television.

However, “we have to pull ourselves together, we have to do it, I think we have no other choice.” In the eyes of the Ukrainian president, the sovereignty of Ukraine is essential and he judged that a return to the situation which prevailed before the launch of the Russian invasion, on February 24, would constitute a “victory”.

Volodymyr Zelensky also explained that Ukraine would become like a “greater Israel”, with security as the top priority for the next ten years.

According to the mayor, Anatoli Fedorouk, more than 300 inhabitants were killed, many of them summarily buried in a mass grave near one of the town’s churches.

In defence, Moscow countered that the civilians in Boutcha had been killed by the Ukrainians. But an investigation by the New York Times, which analyzed images from the Maxar satellite, seems to show the opposite. “Satellite images refute Russia’s claim that the killing of civilians in Buchaa suburb of the Ukrainian capital, happened after his soldiers left town“, indicates the American daily.

Breaking News: Satellite images refutes Russia’s claim that the killing of civilians in Bucha, a suburb of Ukraine’s capital, occurred after its soldiers had left town, a New York Times analysis found. https://t.co/2pDlly6EHs

Indeed, according to Maxar, these “high resolution images (…) corroborate recent videos and photos on social networks revealing the presence of bodies lying in the streets (of Boutcha) and abandoned for several weeks”, indicates in particular 20 Minutes.

The Russian ambassador to France is summoned this Tuesday, April 5 to the Quai d’Orsay, to be notified of the expulsion of diplomats.

#Russia | France decided this evening to expel many Russian personnel with diplomatic status assigned to France whose activities are contrary to our security interests. This action is part of a European approach.

– Zelensky will speak this Tuesday before the UN Security Council

Ukrainian President Volodymyr Zelensky said he would speak to the United Nations Security Council on Tuesday and predicted more mass graves would be uncovered across the country, blaming Russian troops for mass killing of civilians .

While at least 300 civilians were killed in Boutcha, where mass graves and corpses were discovered after Ukraine regained control of the town from Russian troops, he said he expected the toll be even heavier in Borodyanka and other cities of the country.

Read:  Maghreb: the temptation of Russia

The meeting of the Security Council must focus on the accusations of war crimes formulated by Ukraine against the Russian army after the discovery of hundreds of corpses, some of them tied up, in Boutcha, near the capital kyiv.

Moscow has categorically rejected these accusations, accusing kyiv of “criminal provocations” and ensuring that it will present to the Security Council evidence that the Russian army is not involved in these atrocities.

Volodymyr Zelensky has already spoken via videoconference before more than a dozen assemblies, including the American Congress and the European Parliament. “I want to emphasize that we are interested in the most comprehensive and transparent investigation, the results of which will be known and explained to the entire international community,” the Ukrainian president said in a daily video message.

The UK Presidency of the Council will ensure the truth is heard about Russia’s war crimes.

– Russia warns of “symmetrical” measures after the expulsions of diplomats

Russia will respond proportionally to the expulsions of its diplomats ordered by a number of Western countries, the country’s former president and deputy director of the national security council, Dmitry Medvedev, said on Monday evening April 4.

In a message on Telegram, he wrote that “everyone knows the answer: it will be symmetrical and destructive for bilateral relations”. “Who did they punish? First, themselves.”

France announced on Monday April 4 that it was going to expel “many” Russians with diplomatic status. According to a diplomatic source, 35 people are affected by this measure.

Germany announced a similar measure. Dmitry Medvedev has warned that Russia may decide to close the country’s Western embassies. “It will be cheaper for everyone. And we will end up just looking at each other through sights.”