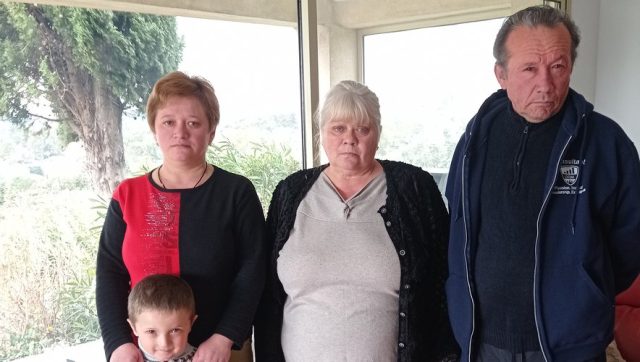 Hosted in Villeneuve-lès-Avignon, the four Ukrainians were unable to register at the Gard prefecture. An agonizing wait as they fled the war.

On March 9, Villeneuvois Philippe and Brigitte Rouquette, listening only to their hearts, took the road to Poland with their personal vehicle to deliver a ton of medical and paramedical equipment as well as basic necessities to the Ukrainian border. . Three days later, they went to the Ukrainian refugee center in the town of Lubycza Kroleska.

After multiple presentations of official documents, the Mylnikov family was entrusted to them in order to be lodged at their home and with their friends, Catherine and Jean Pascal Moch. 48 hours later and 2,300 kms further, this family, made up of grandparents, their daughter and their grandson Kiril, settled in Villeneuve, in safety far from the bombs and the horrors of war, after ten days spent in a cellar.

The town hall of Villeneuve-lès-Avignon provided them with assistance, as well as the other host families, in particular by allowing the children to go to school and by bringing together the refugee families so that they could learn about all the means working to meet their immediate needs and alleviate their distress, with the help of various local associations.

A passport in Cyrillic

But this dynamic of generosity came up against administrative difficulties. After their request on the internet, the three Ukrainian families housed in Villeneuve were summoned to the Gard prefecture in order to submit their file there to regularize their refugee situation and obtain a temporary residence permit for temporary protection, valid for six month.

But at the check-in counter, the Mylnikov family, who don’t have biometric passports, were simply told that “the passports presented were written in Cyrillic (alphabet used in Ukraine) and therefore indecipherable”. Moreover, explain the Villeneuvois, “the French speaking Ukrainian who volunteered to translate our passports got no credit as she is not sworn“.

Read:  Ukraine: Transnistria, martial law in Russia, the risk of escalation of the conflict raises fears of a long-term war

The situation is “dramatic for this family which is currently prohibited and excluded from any help but also unable to work, to find accommodation and above all to take care of itself, except in the hospital, while the grandparents have serious health problems” alert the Villeneuvois who host them.

The Rouquette and Moch families, involved in this humanitarian approach, are more than distraught: “Should we consider this family as stateless refugees? Should we drive her back to the Polish-Ukrainian border? The Mylnikov family still has no return or appointment in the prefecture!.