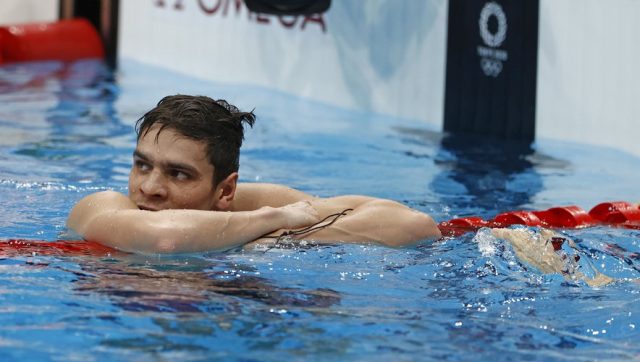 Russian swimmer Evgeny Rylov, gold medalist in Tokyo in the 100 and 200m backstroke, has been suspended for nine months by the International Swimming Federation (Fina) for his support for the Russian army’s invasion of Ukraine.

Fina’s Disciplinary Committee has decided to suspend Evgeny Rylov for nine months, “following his participation and behavior in an event at Luzhniki Stadium in Moscow on March 18, 2022. The suspension takes effect from April 20, 2022” , Fina explained in a press release.

To celebrate the eight years of the annexation of Ukrainian Crimea, after a pro-Western revolution in kyiv in 2014, Russia organized a demonstration on March 18 at the Luzhniki stadium in Moscow, bringing together 95,000 people inside the enclosure and 100,000 outside.

During this ultra-patriotic gathering, banners proclaimed “For a world without Nazism”, “For Russia”, so Russia justifies its military operation in Ukraine launched on February 24 by the need to “denazify” the country.

Read:  War in Ukraine: "We must expect insane civilian losses"

During his speech, Russian President Vladimir Putin praised the forces engaged in Ukraine, citing in particular the Bible and hailing the “heroism” of Russian soldiers. Several renowned Russian athletes, including Evgeny Rylov, participated in this gathering.

Some were highlighted by going on stage, and sporting the “Z”, a letter that has become a patriotic symbol, because it is inscribed on many Russian tanks deployed in combat zones.

Russians and Belarusians excluded from the Worlds in Budapest

“Evgeny is not only the pride of Russia, but the pride of all international swimming,” he said, as quoted by state news agency RIA Novosti. “Suspending an athlete for 9 months because of his participation in a concert, it’s not even shameful, it’s simply ridiculous”, reacted for his part the president of the Russian Olympic Committee, Stanislav Pozdniakov, on Telegram messaging , denouncing “open discrimination according to the principle of nationality”.

Following the invasion of Ukraine by the Russian army on February 24, Fina first authorized Russian and Belarusian swimmers on March 8 to participate under a neutral flag in the 2022 Worlds, scheduled for Budapest from March 18 June to July 3, before finally deciding on March 23 to exclude them.