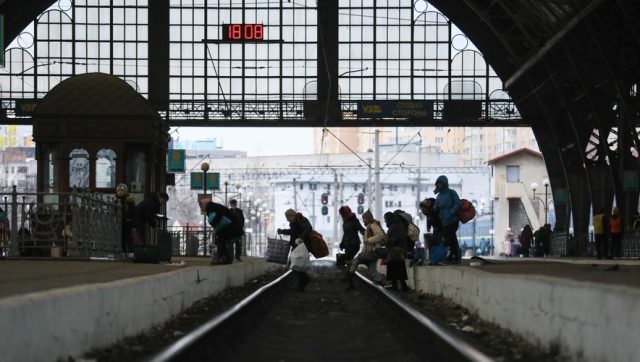 A truce approved by Russia, war crimes denounced by the UN, a request to open humanitarian corridors by Orthodox Easter… Update on the news in Ukraine, this Friday, April 22.

The Patriarch of the Russian Orthodox Church Cyril defended the invasion of Ukraine by Russia. Today, Pope Francis announces the suspension of his meeting with the representative of the Orthodox Church. The pontiff told the Argentinian daily La Nacion that the meeting “could lead to a lot of confusion at the moment”. This meeting would have been the second between a head of the Catholic Church and a head of the Russian Orthodox Church, six years after the one organized in Cuba. The meeting date will surely be postponed to June 14 in Jerusalem. As a reminder, the pope condemned the war in Ukraine last Saturday, during the Easter vigil.

Russian Orthodox Church: “The war in Ukraine would be nothing but a metaphysical fight against an evil force” https://t.co/aNalOVkotZ

The President of the European Council asks the Russian army on Sunday 24 April. On his Twitter account, the representative of the Member States of the European Union calls for “immediate” humanitarian corridors. Mariupol is now almost totally besieged, but the strategic port in southeastern Ukraine still has Ukrainian fighters entrenched in the industrial site of Azovstal. This Friday, no evacuation corridor could be opened by civilians.

The humanitarian corridors in #Mariupol and in other besieged cities must be immediate, especially on the occasion of Orthodox Easter.

A truce may be approved by Russia

The Azovstal metallurgical plant, the last Ukrainian resistance in Mariupol, could be the subject of a truce, on “all or part of the territory”, reports Le Figaro, citing the words of the Russian Ministry of Defense. After the raising of the white flags, the civilians will be authorized to join the territory of their choice, of Ukrainian or Russian belonging.

At a press conference in New Delhi today, Boris Johnson spoke about the war in Ukraine. He notably insisted on “a catastrophic mistake by Putin”, to have opted for repression “based on artillery, to try to crush the Ukrainians.” A prolonged war until the end of 2023 seems completely possible to him. During this same conference, the Prime Minister confirmed that he wanted to deliver tanks to Poland, which could itself provide artillery to Ukraine to respond to the Russian invasion.

The mayor of Mariupol Vadim Boïtchenko accuses the Russians of having “buried between 3,000 and 9,000 residents”, in a message published by Telegram, indicates AFP quoted by Le Monde.

Satellite images published Thursday by the American company Maxar Technologies show the appearance of mass graves near the cemetery of Manhush.

The UN denounces the “war crimes” of the Russian army

Schools and hospitals have reportedly been bombed, and scores of civilians killed by shelling since February 24. The Office of the High Commissioner for Human Rights of the United Nations documents the murder of 50 civilians west of kyiv, in the city of Boutcha, including summary executions.

Around 50 war crimes reports in the UK

This Friday, the Metropolitan Police Unit of Greater London launched an appeal for witnesses, for the investigation of the International Criminal Court (ICC). More than fifty reports of war crimes, the facts of which occurred in Ukraine, have been reported to British law enforcement. The investigation focuses on facts dating back to November 21, 2013, the start of the pro-Western Maidan revolution, the annexation of the Ukrainian Crimean peninsula and the beginning of the tense opposition between pro-Russian separatists and the Ukrainian army.

\ud83d\udea8 | We continue to appeal to anyone in the UK with direct evidence of possible war crimes in #Ukraine to get in touch with our War Crimes Team.

DCS Dominic Murphy: “We are here and we can help.”

Growth stunted by war in the UK

An S&P Global survey highlights the slowdown in the UK private sector in recent weeks. The composite PMI index fell by 57.6 points, its lowest level for 3 months.

Olaf Scholz responds to the newspaper Spiegel on his reluctance to deliver heavy weapons to Ukraine and says he wants: “Avoiding an escalation towards NATO is an absolute priority for me” (…) “The consequences of an error would be dramatic”.

The appeal of the mayor of Mariupol

The mayor of Mariupol launched on Friday a new call for the “complete evacuation” of the city southern Ukraine which President Vladimir Putin says is now controlled by Russian forces.

“We only need one thing – the complete evacuation of the population. Around 100,000 people still remain in Mariupol“, declared the mayor Vadim Boitchenko on national television. The elected official, who is no longer in Mariupol, did not give an update on possible fights in the city or its surroundings.

Vadim Boitchenko told Reuters in an interview on Thursday that only Putin can decide the fate of civilians still trapped in the port city. Under the intense bombardments, the citizens who remained there during almost two months of siege and fighting suffered without electricity, without heating and without water. Vladimir Putin said on Thursday that Russian troops had “liberated” Mariupol, making it the biggest city to fall since the start of what Moscow calls a “special military operation”.

The Deputy Commander of the Central Military District of Russia launches the second phase of the military operation. Total control of Donbass and southern Ukraine is targeted. The operation could extend the annexed territory, up to Crimea, already annexed since 2014.

No humanitarian corridor this Friday

According to the Ukrainian authorities, a contingent is still resisting in the underground bunkers of the Azovstal steel complex, alongside hundreds of civilians, in dramatic conditions. A small convoy was able to leave Mariupol on Wednesday and reach the town of Zaporizhya, controlled by Ukrainian forces, the following day.

Deputy Prime Minister Irina Vereshchuk said separately on Friday that Ukraine was not seeking to establish humanitarian corridors to evacuate civilians from Ukrainian towns and villages. “Due to the danger on the roads today, April 22, there will be no humanitarian corridors,” she wrote on Facebook. “To all those waiting to be evacuated: be patient, hold on!”

The Augsburger Allgemeine newspaper reveals this Friday, April 22 the decision of the German Ministry of Development. 22.5 million will be advanced by the Federal Government for the reconstruction of the Ukrainian electricity network, and 1.4 million euros will be advanced for the reconstruction of apartments bombarded by Russian forces and for the purchase of medical equipment.