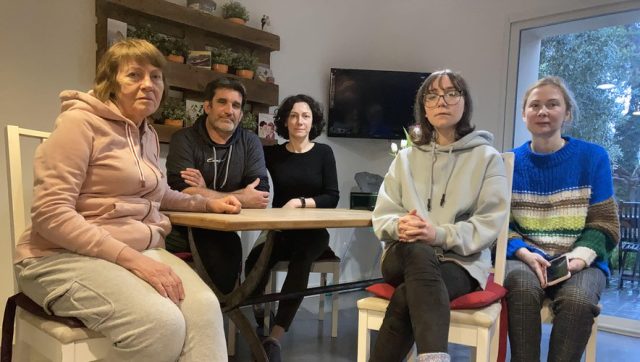 “Yes it’s true. I’m hosting my mother-in-law, my wife’s distant cousin and her daughter. It’s certainly easier when it comes to his family. But faced with this unacceptable war that Putin is waging against Ukraine, we must help the refugees, as we can, each according to their means. They need everything, and also to find accommodation”explains winemaker Sébastien Collot, owner of the La Maurine estate, located in Causses-et-Veyran.

Hence the idea of ​​mobilizing cellars, private individuals and cooperatives, so that they offer to welcome these families who have fled their country. Beside him is his wife, Elena, who is Ukrainian, her mother, as well as her cousin, Anna, and her daughter, Diana, 16.

“My mother had come to spend the Christmas holidays with me and was to stay three monthssays Elena. She had obtained a visa and was due to leave at the end of March. But of course, when the war broke out, we all decided that she wouldn’t go back to Ukraine. For my cousin and her daughter, it’s different.”

Anna and Diana, who live in Zaporijia, in the south of this Baltic country, arrived at the estate on March 8. The mother, a podiatrist, like her daughter, does not speak French. And even if Éléna translates their words, they remain rare and modest. Surely the shock…

Read:  For lack of budget, a frigate protecting the "Charles de Gaulle" deprived of anti-missile jammers

“The decision to leave was very difficult for me. At the beginning, that is to say from February 24, I hesitated. I hoped that the talks would succeed. In addition, my parents, who live in on a farm 50 km from Mariupol, do not want to leave their animals. My husband, mobilized like all men from 18 to 60, must stay. But when the Russians bombed the airport in my city on March 2, I decided to flee, especially for my daughter”explains Anna, who, thanks to Elena’s mother, got in touch with her cousin.

“I hadn’t seen him for 25 years, Elena exclaims. Sébastien and I signed up at the start of the hostilities on the Facebook group of the Ukrainians of Montpellier to offer to welcome a mother and her child. As soon as Anna contacted us, we took down the ad. “

The journey of the mother and her daughter was very complicated. It lasted six days, from Zaporijia to Causses-et-Veyran, via Lviv, two different cities in Poland (all by train) and Barcelona airport. “We stayed four nights in a hotel in Poland because we couldn’t find flights, so many people were rushing to catch a plane.”

And Sebastian adds: “Luckily, even though their journey was very hard, they knew where to go. But how many Ukrainians have no connection with foreign countries and don’t know where to go?”

“We, the winegrowers, are lucky to have space on our farms. We often have premises, empty or not, which can be fitted out to accommodate people. Some wine estates even have houses for the grape pickers which are unoccupied at the moment, others are providing seasonal accommodation, without counting on empty company apartments in cooperative cellars which, at the time, housed their director, or even empty apartments or pavilions belonging to municipalities. a roof for Ukrainians who ask for it. For the rest, we will manage with charities.”

The winemaker Sébastien Collot, from the La Maurine estate in Causses-et-Veyran, who has hung the yellow and blue flag of Ukraine on the gate of his estate, is knocking on the doors of his colleagues. Those interested can contact the Collot family on the Facebook “Éléna Lankis”.