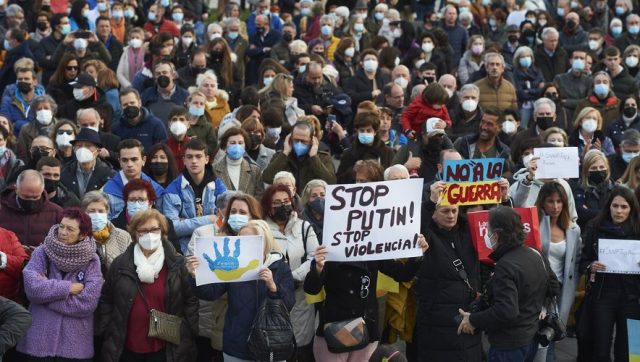 From Sydney to Tokyo, many demonstrators gathered around the world on Saturday in solidarity with Ukraine, demanding an end to the Russian offensive or sanctions against Vladimir Putin.

In Europe, several thousand people, including many Ukrainian residents, took to the streets of London, Paris, Nicosia, Berlin, Athens, Helsinki, Madrid or Milan, draped in Ukrainian colors or carrying “No to war”, on the third day of the Russian invasion of Ukraine.

“Look at the people gathered here, everyone is scared. (…) We had peace for 80 years and all of a sudden war is coming back to Europe,” said Stefan Pischel among a crowd of around 2,500 demonstrators at Karlsplatz Square in Munich.

In Bern, the Swiss capital, where the Ukrainian flag was hoisted over the town hall, organizers of a rally claimed 20,000 participants.

Read:  Lost Ark, the best methods to recover the fragments of harmony and improve your level of equipment

Hundreds of protesters arrested in Russia

In Istanbul, Ukrainians living in Turkey sang the national anthem and held up banners depicting images of bloody hands. “My family is in the Kyiv region which is under attack today. I don’t know what to do, what to think. I call them every 10 or 15 minutes,” said a protester calling herself Victoria. “I hope the whole world…will stand up and do something to protect our families.”

Several hundred people demonstrated in front of the United Nations headquarters in Geneva calling for “say no to Putin”. “I’m ashamed for my country of birth,” said Valeri Bragar, a native Russian who obtained Swiss nationality. In Russia itself, hundreds of anti-war protesters have been arrested in recent days.