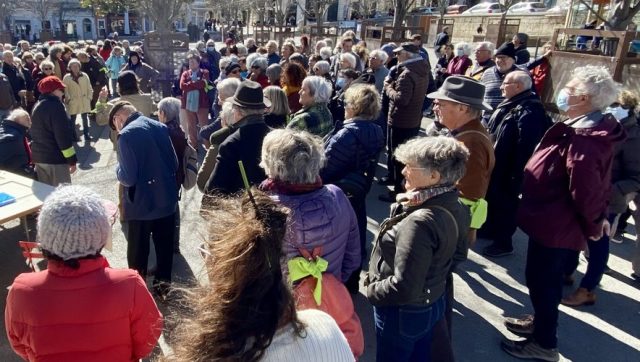 At the initiative of the League for Human Rights (LDH) and the Education Without Borders Network (RESF), it took place on Saturday February 26 in Sète.

A minute of silence. And words to denounce.

Saturday, February 26, in solidarity with the Ukrainian people, the Human Rights League (LDH) of Sète and the Thau Basin and the Education Network without Borders (RESF) intervened in Place Aristide-Briand. In front of the people gathered for the weekly public meeting of the collective Bancs publics, which had agreed to host them, the representatives of the two associations read a text of solidarity, while Russia unleashed a war and the invasion of Ukraine on February 24 last.

“We condemn the decision of Russian President Vladimir Putin to launch a war of invasion against Ukraine, after months of fruitless diplomatic discussions. We see in this aggression the confirmation of the strong tendency of totalitarian regimes to make prevail force at all times, in defiance of international law, the sovereignty of States and the fundamental rights of peoples.”

Read:  Sales: last chance to take advantage of this M.2 SSD for less than $40!

Rejection of a culture of violence

Then to continue: “The lack of effective reactions to the attacks on freedoms, human rights and their defenders nurtures a culture of violence, war and conflict. Faced with this heavy challenge threatening all democracies, we call the international community and France to act urgently to obtain an immediate de-escalation and the protection of the civilian populations already hard hit.”

And to conclude: “We express our total solidarity with the Ukrainian people and support all the initiatives everywhere in France going in the direction of peace and the interest of the peoples concerned. As well of course, as all the local actions of solidarity which will be committed.”