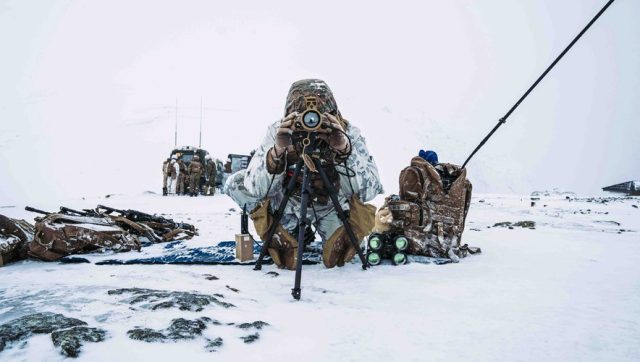 Could NATO intervene in Ukraine if the Russian army uses chemical and biological weapons? US President Joe Biden hinted as much last week. In Norway, where NATO soldiers train, the scenario is anticipated.

In the midst of the Ukrainian crisis, the full-scale exercise of NATO forces in Norway took on a particular dimension. 30,000 soldiers, 200 planes and around 50 ships have come together since March 14 to take part in Operation Cold Response 2022, in which 27 of the 30 member countries of the North Atlantic Treaty Organization are collaborating.

The stated objective of this exercise is to train NATO soldiers in combat conditions in extreme cold, on land, at sea and in the air. Scheduled for a long time, Cold Response 2022 is also an opportunity for troops to anticipate an intervention in Ukraine.

This option is currently ruled out by all European leaders, including Emmanuel Macron. “There is currently no explicit military threat against NATO or Norwegian territory, said Odd Roger Enoksen, Norwegian Defense Minister. “However, the situation in Europe has not been so unpredictable for a long time” .

The risk of chemical and biological weapons

Our colleagues from BFMTV also captured images of specific training from the 2nd Dragoon Regiment, based in Fontevraud-l’Abbaye (Maine-et-Loire). We can see soldiers advancing with gas masks, then taking possession of a fake terrorist laboratory manufacturing biological weapons.

In a second scenario, the regiment reviews the procedures for decontaminating soldiers and taking care of the wounded. A training in the chemical and biological threat which questions, after the recent position taken by the American president.

NATO and the G7 attentive

Thursday, March 24, Joe Biden for the first time mentioned a “response” from NATO in the event of Russia’s use of chemical weapons. “We will respond if there is recourse. The nature of the response will depend on the nature of this use,” he said after the NATO and G7 summits in Brussels.

A position tempered by French President Emmanuel Macron, who did not wish to communicate on any red line set for Russia. In the wake of the NATO and G7 meeting, the Secretary General of the Alliance however specified that “equipment to help Ukraine protect itself against chemical, biological, radiological and nuclear threats” was going to be delivered .