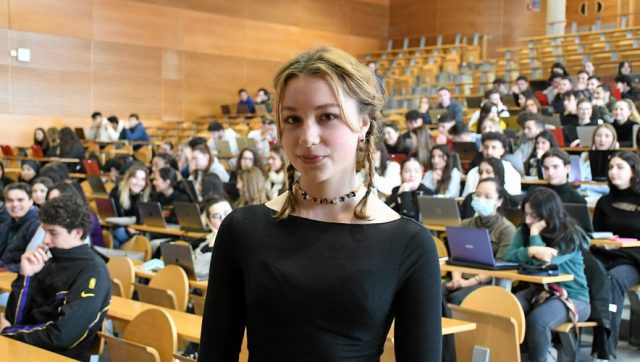 Mariia, a Ukrainian student, tells her story, this Wednesday, in front of students in first year of management. The opportunity to sensitize his comrades to this war.

“It is very difficult to imagine that this violence is happening in my country.“It is with great force that Mariia confides her thoughts on the war in Ukraine, this Wednesday, March 16. During a course on Europe, given by Professor Stéphane Barbarin, the war in Ukraine invites you to an amphitheater at Montpellier Management University, in Richter.

Mariia grabs the microphone and begins to tell her story, that of millions of people: “Since February 24, it’s war in my country “, she begins. This 18-year-old management student arrived in France in November 2021: “JI returned for the Christmas holidays to kyiv, that’s where I saw my parents for the last time. I could not return for the last vacation because of the situation“, confides Mariia. Her testimony will be followed by a video she made, for “show the history of Ukraine “, she explains.

“It stresses me out a lot”

Mariia grew up in kyiv with her family. A city that his parents were forced to flee, to reach the west of the country, because of the bombings. “My mother left yesterday to go to Nice, now she is in Romania, I believe. My father tries to do everything possible to help.“

A strong testimony but full of emotion: “I feel guilty. In France, I am safe, but in Ukraine it is the civilians who take up arms. These are people of my age who defend my country “. The aim of the intervention is also to deconstruct certain stereotypes, in particular: “The one that Ukraine is part of Russia. Many people asked me, before the war, if Ukraine was part of Russia“.

This young girl calls her family twice a day: “I have no friends here, I am alone. It stresses me a lot but when my mother arrives it will be better for me“. She concludes with a call for donations: “Giving makes a difference for Ukrainians, for my country“.