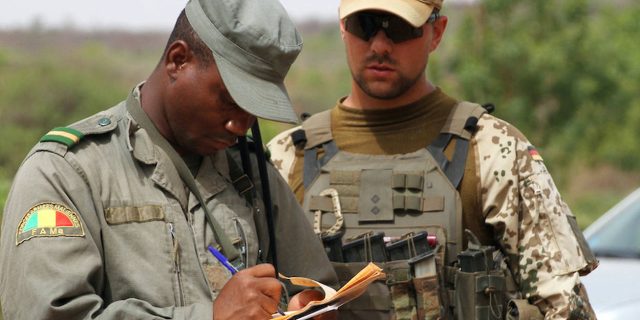 “On stop the training missions and training of the armed forces and the national guard, but we will continue training on the laws of war, because the military must know that war has laws and rules of the game ” , very firmly displayed, the Spaniard Josep Borrell at the end of a meeting with EU foreign ministers in Luxembourg, Monday, April 11, on the subject of European training missions for the army and the Malian National Guard. “Events force us to this decision. We have not obtained (from the junta) the requested guarantees. But we are not abandoning the Sahel. We are going to deploy to neighboring countries,” he explained, while continuing with counseling and education activities.

A decision that comes after the Moura massacre

It was the events that took place in Moura that led the EU to decide. Malian Armed Forces (Famas) and Russian auxiliaries are notably accused of very serious abuses against civilians, at the end of March, in this village in central Mali. Bamako denied this massacre, claiming to have neutralized jihadists. The Malian authorities have announced the opening of an investigation. Russia at the end of last week congratulated Bamako for its operation to neutralize jihadists in Moura. The Moura region is one of the main centers of violence in the Sahel. The United Nations has announced that it has opened an investigation. And the Europeans are calling for an independent investigation.

Beyond these events, the European Union had been wondering for months about its presence in Mali through EUTM missions, especially since the announcement of the withdrawal of French and European troops from this country decided at the beginning of year and still ongoing. “The question is how the Minusma will be able to continue to work. If it’s to stay blind and deaf in barracks, it’s not necessary to stay, ”said Josep Borrell.

The military seized power in Mali in two coups, in August 2020 and then in May 2021. The main problem facing the EU is the presence of mercenaries from the Russian group Wagner, who came to Mali at the call of the junta, and the collaboration of units of the Malian army trained by the EU in their activities. Bamako denies any presence of mercenaries from the Wagner group on its soil, only acknowledging the assistance of “Russian instructors” under a bilateral cooperation agreement dating back to the 1960s. On the contrary, several Western countries have criticized the deployment of several hundreds of Wagner paramilitaries in Mali in parallel with the departure of the forces of Barkhane and Takuba.

German Foreign Minister Annalena Baerbock has planned to meet the head of the Malian junta during a trip to Mali this week. She wants to “get a clear idea of ​​​​the political and security situation” in order to decide whether or not to maintain the Bundeswehr, explained a spokesperson for the ministry. Indeed, Germany plans to withdraw its soldiers present in Mali as part of the EU training mission and the United Nations mission in Mali, Minusma. Some 300 German soldiers participate in the European Union Training Mission in Mali (EUTM), and 1,100 soldiers in Minusma, which has 14,000 soldiers and police.

The EU has committed several hundred soldiers and experts to two training missions in Mali, EUTM for the armed forces and Eucap Sahel-Mali for the police. Eucap’s mandate, approved in 2015, has been extended to January 31, 2023. EUTM’s, since 2013, runs until May 18, 2024.

A precedent with the Central African Republic