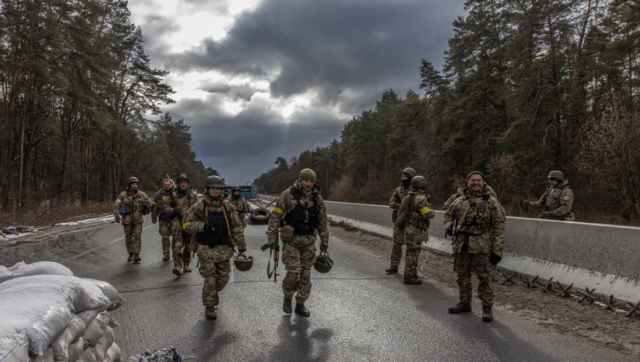 All information related to the Russian invasion of Ukraine on Wednesday April 13, which marks the 49th day of the conflict.

The Russian Defense Ministry said on Wednesday that 1,026 soldiers from the Ukrainian Navy had surrendered to Russian forces in the besieged city of Mariupol, which Kyiv did not confirm.

“In Mariupol, near the Ilyich steel plant, following the successful offensives of the Russian armed forces and the militia of the Donetsk People’s Republic, 1,026 Ukrainian soldiers of the 36th Marine Brigade voluntarily laid down the weapons and surrendered,” the Russian ministry said in a statement.

Russian television broadcast footage of what it said were Ukrainian soldiers, some injured, surrendering to Russian forces with their hands up. The spokesman for the Ukrainian Ministry of Defense said he had no information on this subject.

– Zelensky calls on the United States to provide more weapons

“We are grateful for the American assistance provided so far and we urgently need more heavy weapons to prevent further Russian atrocities,” the Ukrainian president tweeted on Tuesday evening.

True words of a true leader @POTUS. Calling things by their names is essential to stand up to evil. We are grateful for US assistance provided so far and we urgently need more heavy weapons to prevent further Russian atrocities.

– Macron does not use the word “genocide” used by Biden

French President Emmanuel Macron on Wednesday did not take up the term “genocide” used by his American counterpart Joe Biden to accuse Russian President Vladimir Putin of it in Ukraine, questioning the usefulness of an “escalation of words” for end the war. Asked about France 2 on Joe Biden’s statements on Tuesday, the candidate president replied that he wanted to be “careful with the terms”.

Read:  Samsung takes care of its smartphones but favors the high end

The mayor of Mariupol said on Tuesday that, according to the latest estimate, around 21,000 civilians have been killed in the southern Ukrainian port city since the Russian offensive began on February 24. Speaking on television, Vadym Boichenko added that calculating an accurate toll was complicated by street clashes in the city.

Volodymyr Zelensky on Wednesday offered to exchange pro-Russian politician Viktor Medvedchuk for Ukrainian prisoners of war. The Ukrainian secret services announced on Tuesday the arrest of the politician, the main and very influential ally of the Russian president, who had subscribed in February to house arrest.

Viktor Medvedchuk, who claims that Vladimir Putin is the godfather of his daughter, is the subject of an investigation for treason opened last year by the Ukrainian authorities. He denies any misconduct. A Kremlin spokesman quoted by the Russian news agency Tass said he saw a photo showing Viktor Medvedchuk in handcuffs and with drawn features but could not say that it was authentic.

US President Joe Biden stood by his statements on Tuesday, after he called Russia’s actions in Ukraine “genocide”, adding that Russian President Vladimir Putin “(was) trying to eradicate the idea that he is possible to be Ukrainian”. “I called it genocide because it’s increasingly clear that (Vladimir) Putin is just trying to eradicate the idea that it’s possible to be Ukrainian and the evidence is mounting,” Joe Biden said to reporters before boarding Air Force One to return to Washington after a trip to Iowa.