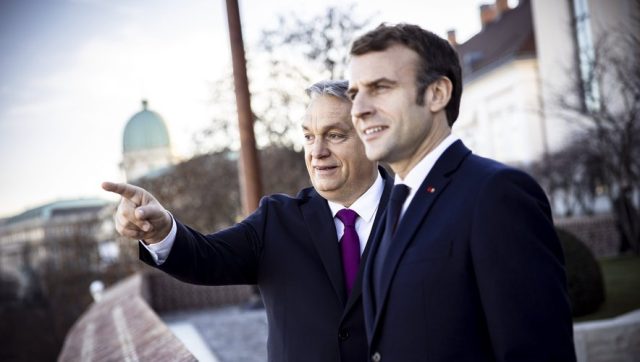 France is ready to cooperate with Hungary despite significant political differences between the two countries, Emmanuel Macron said in Budapest on Monday, alongside Nationalist Prime Minister Viktor Orban.

The French president was then due to participate in a meeting of the Visegrad group, which brings together the leaders of Hungary, Poland, the Czech Republic and Slovakia. The program of his visit also included a meeting with representatives of the opposition to the Orban government.

“We have political disagreements which are known but we have the will to work together for this Europe and to be loyal partners,” said Emmanuel Macron.

He recalled, citing several points of divergence with Budapest, that “respect for the rule of law and fundamental rights, media pluralism, the fight against discrimination is at the heart of the European project”.

He also mentioned “the need to respect each of the member states” in order “to keep us all together, faithful to our project and respectful of one another”.

Respect for the rule of law and fundamental rights, media pluralism, the fight against discrimination is at the heart of the European project.

While France will take the presidency of the Council of the European Union in less than three weeks, the French head of state said last week that the Hungarian nationalist leader was both a “political opponent” and a “partner European “with which it is possible to reach political compromises.

A relationship based on respect

Viktor Orban validated this observation Monday by also evoking a bilateral relationship based on respect.

“Because France is the country of the Encyclopedists, it is the best in terms of definitions, so we accept the definition that the president recently used according to which we are political opponents and at the same time European partners” , he said at the joint press conference.

Among the disagreements between France and Hungary are the rights of the LGBT community and immigration, Emmanuel Macron having even spoken a few months ago of a “cultural battle” with Hungary and some of its neighbors.

Paris and Budepest come together on nuclear power

Paris and Budapest, on the other hand, agree on several other important European issues of the moment, such as the promotion of nuclear power in the ongoing debate on the classification of energies likely to contribute to the ecological transition of the EU, the control of migratory flows or again agricultural policy.

We are political opponents and at the same time European partners

The Élysée clarified that the French president had spoken of respect for the rights of the LGBT community and the rule of law during his meeting with the Hungarian president, János Áder, whose role is mainly protocol.

Read:  What do we know about the arrest of these two French tourists in Iran, accused of having "destabilized the country"?

Emmanuel Macron’s visit to Budapest began with a tribute to the Hungarian philosopher Agnes Heller, an opponent of Viktor Orban whom he had met in 2019, a few months before his death.

Agnes Heller, born in 1929 in Budapest, was a Holocaust survivor and most of her family perished in Nazi concentration camps.