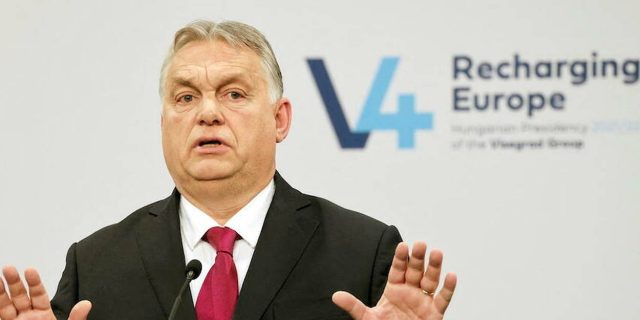 Viktor Orban has won the legislative elections in Hungary, according to the first official partial results, published by the National Electoral Office (NVI). For now, 77% of ballots have been counted. According to these first estimates, Fidesz won 54.24% of the vote, ahead of the coalition of six opposition parties which won 33.92% of the vote, said the NVI. Viktor Orban will therefore return for a fourth consecutive term (of four years), after twelve years at the head of Hungary.

“We have won an exceptional victory – a victory so great that you can probably see it from the moon, and in any case certainly from Brussels,” said Mr. Orban, a regular at arm wrestling, with a big smile and applause. with the EU.

Analysts had predicted a much closer battle. The ballot was marked by a turnout of 68.7%, a figure close to the record of four years ago. We still have to finish counting the ballots of the big cities, but if this result were to be confirmed, it would mark an increase for Fidesz and its Christian Democrat allies, who had won a total of 49.27% ​​of the votes in the previous election in 2018. Mr. Orban then won a two-thirds majority in Parliament, as in 2010 and 2014.

The full official result will only be known during the week, after the counting of hundreds of thousands of votes from voters from the diaspora as well as expatriates. The Hungarian legislative voting system combines simple majority by constituency and proportional, a system implemented for the first time in 2014 and favoring, according to analysts, Fidesz in power.

Read:  Last hours of the sales, last massacre on prices: here is the top of the promotions

Viktor Orban’s opponent, Peter Marki-Zay had still not spoken at 9:00 p.m. GMT. By slipping his ballot into the ballot box alongside his family, this 49-year-old conservative mayor had earlier denounced “unfair and impossible conditions” aimed at allowing his rival to “remain in power forever”. And to quote public media at the boot of the government – itself was entitled to only five minutes of antenna on public television, in all and for all. “The power of the pro-government press is too great, I don’t think we’re going to win,” said Flora Arpad, a 19-year-old student, who was voting for the first time.

In the opposition coalition some, like the vice-president of Jobbik, Marto Gyongyosi, denounced “irregularities”. Accused by Brussels of multiple attacks on the rule of law, Viktor Orban has muzzled justice and the media over 12 years, while advocating an ultra-conservative vision of society. The ballot was held for the first time under the supervision of more than 200 international observers. Each camp also deployed thousands of volunteers.

Among Fidesz supporters, Zsuzsa Alanyi, a 44-year-old decorator and mother of four, welcomed “the tax cuts and aid” allocated to families. For Agnes Kunyik, 56, on the contrary, “they ruined our country, they destroyed it”. Criticizing “the most corrupt government in the history of Hungary, “MZP” had crisscrossed the country in recent weeks, listening to the inhabitants, in the hope of defeating the “propaganda” of the government.

“The war changed everything”

Especially since the conflict in neighboring Ukraine has completely changed the situation. “War broke out, and war changed everything,” Orban summed up on Friday during his only campaign rally. He posed as “a protector” of Hungary, a guarantor of peace and stability, by refusing to deliver arms to Ukraine and to vote for sanctions which would deprive the Hungarians of precious Russian oil and gas.

At the same time, on election posters and in the pro-Orban media, Peter Marki-Zay was portrayed as “dangerous”, accused of wanting to rush the country into war because of his firm support for Ukraine. The candidate may have underlined the closeness cultivated since 2010 by the Prime Minister with the Russian president, calling him a “Hungarian Putin”, his speech was obviously not enough to convince the voters.

The Hungarians were also called upon to answer four questions in connection with the recent law prohibiting the discussion with those under 18 of “gender reassignment and homosexuality”. An “unhealthy” referendum for the NGOs which had asked the voters to “invalidate” their ballots by ticking two boxes instead of one, with results expected later in the evening.