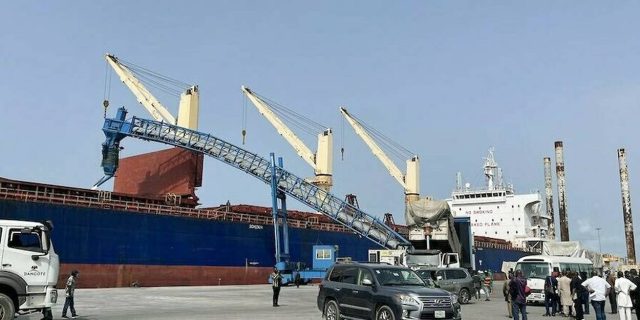 Ua huge installation of 3 million tons on an area of ​​500 hectares, in Ijebu-Lekki, located at the gates of the sprawling megalopolis of Lagos with its 20 million inhabitants. Nigeria plans to become a net fertilizer exporting country after commissioning the world’s second largest fertilizer plant, Dangote Fertilizer Plant. It is the largest plant of its type in Africa and will add to the existing production of 3.1 million tonnes of fertilizer in the West African country. Objective: to boost the country’s agricultural production and ensure its food security by reducing its vulnerability to the price and production of oil, which represents the bulk of the country’s exports.

“This fertilizer plant should further advance our administration’s drive to achieve self-sufficiency in the country’s food production,” President Muhammadu Buhari said at his inauguration on March 22. Under his presidency, the Presidential Fertilizer Initiative (PFI) was established by the government, it aims to encourage local production and thus negotiate competitive prices on certain products such as Moroccan phosphate. This initiative also allows the country to increase its production and create jobs at the local level.

But above all, the commissioning of the Dangote plant comes at a critical time. The war in Ukraine has driven up prices and caused global food shortages. Russia and Ukraine are major suppliers of urea, potash and phosphate, key components of fertilizers. A threat to African crops that could drive up the cost of food even more. For many experts, the global economic context is also opportune for Africa, as it can enable the continent to transform its constraints into opportunities. “We are lucky to have this factory,” Aliko Dangote, the Nigerian businessman at the head of this megaproject, told CNN. “It comes at the right time with the conflict between Ukraine and Russia, because Ukraine and Russia control substantial amounts of agricultural inputs. The total cost of the work is estimated at 2.5 billion dollars and the new factory should also save the State from spending enormous resources each year for imports. The Dangote group is counting on nearly 500 million dollars to be preserved in the national budget.

Diversification at a forced march

After having made a fortune in the import of food products (rice, sugar, flour, etc.), the 64-year-old Nigerian businessman, convinced that the future of Nigeria depends on the diversification of its resources, is turning to agricultural production in his native country.

In Nigeria, the needs are enormous. Since the 1950s and the discovery of oil, the agricultural sector has taken a back seat. Nigeria derives nearly two-thirds of its income from oil windfalls, with black gold earning about 90% of its currency. But, unlike the agricultural sector, the hydrocarbon industry creates few jobs. While more than 70% of the Nigerian workforce works in the agricultural sector. With the Dangote Group project, Nigeria could finally take advantage of its fertile land. The new plant is supposed to increase the yields of Nigerian farmers by giving them access to more fertilizers. Even if a paradox remains, since African farmers are both those who use the least fertilizer – around 15 kg/ha – and those whose yields are the lowest.

” ATver the past five years, more than 35 million bags of blended fertilizer have been produced in Nigeria. As a result, our fertilizer import bill has not only decreased significantly, but we are also witnessing an increase in investment in the fertilizer industry, such as the one commissioned today by the Dangote Group,” said declared thehe Governor of the Central Bank, Godwin Emefiele, during the inauguration of the factory. Beyond that, “the plant creates enormous opportunities in the area of ​​job creation, warehousing, transport and logistics. This will create significant wealth, reduce poverty and help secure the future of our nation. »

In addition to the Nigerian market, Aliko Dangote, whose conglomerate has been exploiting Togolese phosphate since 2019 – one of the essential components of inputs – aims to steal the spotlight from Russia as the main supplier of countries such as Brazil, Mexico, India or even the United States. “The new plant will make Nigeria self-sufficient in fertilizer production with excess capacity to export to other African markets and some markets like the United States, Brazil, India and Mexico,” said Aliko Dangote, who estimates that the plant could bring the country $5 billion in export revenue each year.

Aliko Dangote is no longer to be convinced. In 2014, he launched the work of a gigantic refinery in the Lekki free zone, near Lagos – for an investment of 12 to 14 billion dollars – which aims to supply the Nigerian market and beyond. The objective is of course to reduce the energy bill of Nigeria, Africa’s leading oil producer, which until now has been forced to import most of its needs in refined hydrocarbons. Finally, the billionaire is finalizing the construction of the largest underwater gas pipeline in the world, capable of transporting 3 billion cubic meters of natural gas per day. The new infrastructure must in particular make it possible to recover the gas pumped by the oil platforms. Again, it’s about creating a local market for natural gas.