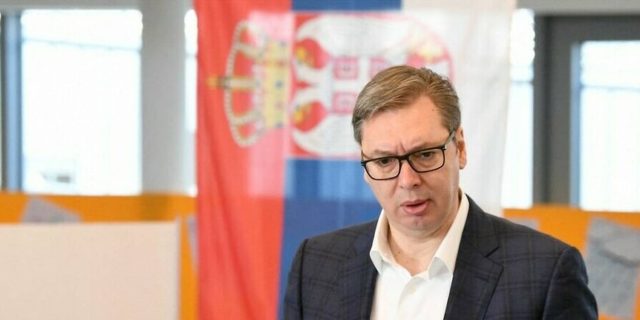 Ihe outgoing Serbian head of state Aleksandar Vucic claimed a landslide victory in the presidential election on Sunday April 3, extending a decade of hold on the Balkan country where he portrayed himself as the guarantor of stability in the shadow of the war in Ukraine.

“There was no suspense at any time,” he said in his victory speech, congratulating himself on having won a second five-year term in the first round with around 60% of the vote. “I am happy that a large number of people voted and demonstrated the democratic nature of Serbian society”, continued the man who was successively Deputy Prime Minister and Prime Minister before becoming President.

Voters were called upon to appoint their head of state, their 250 deputies as well as several municipal councils, including that of Belgrade, the capital. Aleksandar Vucic, 52, said his Serbian Progress Party (SNS, centre-right) had won nearly 44% of the vote in the legislative elections. “We are about to form a government on our own but together with the Hungarian Minority Party we have more than enough votes to form a majority,” he added.

The dominance of the ruling coalition should, however, be less hegemonic than in the outgoing parliament. Official results are not expected to be released until Monday evening.

The war in Ukraine at the heart of the campaign

Russia’s invasion of Ukraine at the end of February changed the course of the campaign which should have focused on the environment, corruption and rights in this Balkan country of seven million inhabitants candidate for the Union European.

But Aleksandar Vucic, used to playing rival influences from East and West, seized the war to his advantage. In a country suffering as elsewhere from the coronavirus pandemic, he presents himself as the only one capable of helming the ship in stormy weather. He campaigned under the slogan “Peace. Stability. Vucic”.

“The influence of the Ukrainian crisis on the elections has been enormous,” acknowledged the president. “Serbia has leaned dramatically to the right” with the entry into parliament of small pro-Russian nationalist parties, he noted.

NGOs reported incidents and violence during the ballot, while opponents denounced attempts by the SNS to intimidate voters in polling stations. Pavle Grbovic, leader of a centre-left opposition party, claimed he was attacked by SNS activists while trying to film fraud in Belgrade.

Aleksandar Vucic denied any irregularity. Serbs from Kosovo, the former southern province never recognized by Belgrade, boarded 40 buses to take part in the elections in neighboring Serbia, Pristina having refused to organize the electoral operations on its soil. Only a few months ago, the opposition seemed to have made a breakthrough in the country of less than seven million inhabitants.

Read:  Pokémon Legends Arceus: What if humans were the villains of the story? The crazy fan theory

In January, Aleksandar Vucic canceled a controversial lithium mine project that mobilized tens of thousands of protesters, a reversal rarely seen in his decade in charge. The opposition assured that it had made a breakthrough in the municipal elections in Belgrade without official results being available.

The Serbs “were not afraid”

“We turned on the light,” responded Aleksandar Vucic’s main rival, retired general Zdravko Ponos. “That’s why so many people went to vote, they weren’t afraid. We’re not going to spoil that.” The government has moved cautiously to manage the crisis in Ukraine by officially condemning Russia at the UN while refraining from any sanctions against Moscow, while many Serbs support the Kremlin war.

Some opposition parties share these pro-Russian views. The others dared not speak out for fear of displeasing pro-Moscow voters. Aleksandar Vucic went to the ballot armed with other advantages. During his long reign, he tightened his grip on all levels of power, including de facto control of institutions and almost all of the media.

He enjoys a large electoral base made up of public servants and their relatives, analysts say. voice.