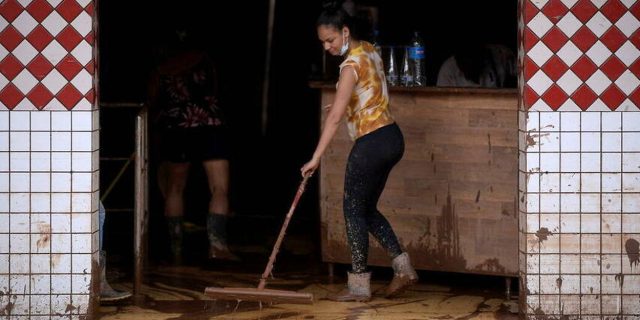 DLandslides and floods in the tourist town of Petropolis, near Rio de Janeiro, killed 18 people on Tuesday, February 15. “So far, 18 deaths caused by landslides and floods have been confirmed,” said a statement from Rio firefighters, more than 180 of whom are on site, 68 kilometers north of the city. The Ministry of Regional Development had previously announced a death toll of six in this mountainous region of the state of Rio, in the south-east of Brazil. The firefighters did not provide a figure regarding the possible number of people injured or missing.

“Teams specialized in search and rescue have been sent to reinforce the rescue operations, with the support of 4×4 vehicles and boats”, they however specified. Images circulated on social networks and in the media, where one saw houses destroyed by landslides on hillsides and cars violently carried away by the current. Many businesses were completely inundated as water rushed through the streets of historic Petropolis, ripping out goods, as seen in videos posted on social media.

In less than six hours, some points in the city received up to 260 millimeters of water, more than was expected for the whole month of February, according to the meteorological agency MetSul. The town hall of Petropolis declared a “state of calamity” to deal with the emergency, and the governor of the state, Claudio Castro, went to show his support. From Russia where he is visiting, President Jair Bolsonaro wrote on Twitter that he was keeping abreast of “the tragedy” and asked his ministers to provide “immediate aid to the victims”. “May God comfort the families of the victims,” he added.

The rains have ended, but others, “light to moderate”, were forecast for the next few hours, warned the town hall. Petropolis, the summer residence of the former imperial court, is a tourist destination that attracts a large number of visitors in search of history, nature walks and a more temperate, even cooler, climate than that of the coast of Rio, due to its altitude. In January 2011, more than 900 people died in the mountainous region of Rio due to heavy rains causing flooding and landslides in a wide area including Petropolis and the neighboring towns of Nova Friburgo, Itaipava and Teresopolis.