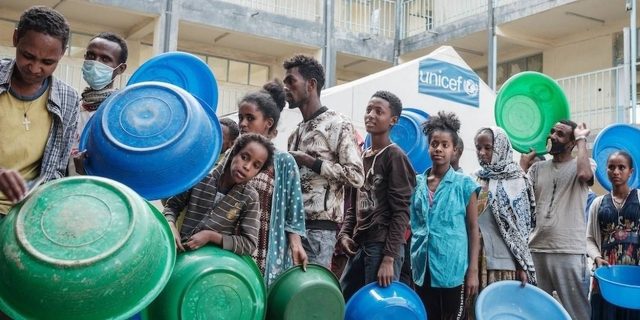 Ihe government of Prime Minister Abiy Ahmed “is committed to making maximum efforts to facilitate the free flow of emergency humanitarian aid in the Tigray region […] To optimize the success of the humanitarian truce, the government calls on the Tigray insurgents to refrain from any further acts of aggression and to withdraw from the areas they have occupied in neighboring regions”. In a press release whose every word was weighed, the Ethiopian Prime Minister wanted this week to open the way to a humanitarian truce demanded for many months by international organizations. The Tigrayan rebels of the Tigray People’s Liberation Front (TPLF) accepted this outstretched hand, subject to conditions. Does this humanitarian truce herald peace in Ethiopia, after nearly seventeen months of conflict? Here are some answers.

Why this truce now?

Diplomatic pressure has increased recently, exemplified in particular by the visit to Ethiopia this week by the American special envoy for the Horn of Africa, David Satterfield.

“International pressure played its part in this decision. Ethiopia is facing economic difficulties due to the war and negotiations were taking place behind the scenes” between belligerents, Awet Weldemichael, Horn expert at Queen’s University (Canada), told AFP.

“Ethiopia’s international partners are unanimously calling for a political solution to the conflict” and “external loans and expenditure commitments are at their lowest for five years”, recalls the Eurasia Group think tank.

A US bill authorizing targeted sanctions in Ethiopia, but also limiting aid from international financial institutions or US development agencies, is being closely scrutinized in the country.

These pressures also come “at a time when Ethiopia is experiencing one of its worst food crises in decades”, with “nearly 30% of its population in need of food aid; yet Ethiopia cannot cope with a food crisis without international aid,” recalls René Lefort, independent researcher and specialist in the Horn of Africa.

For its part, “the TPLF had to water down its wine because the situation is catastrophic in Tigray”, almost deprived of humanitarian aid since mid-December.

“But one of the most important factors, for René Lefort, is that Abiy Ahmed had to pass Tigray by loss and profit. His main front now is against (the Oromo rebels of) the OLA (Oromia Liberation Army) and the Amhara radicals. In recent months, there has been a change of priority for Abiy Ahmed. »

Will aid convoys now be able to access Tigray?

“Not sure that the convoys will resume quickly”, estimates a humanitarian source, the populations of Afar refusing, as long as the TPLF does not withdraw from it, to let the trucks pass on the road linking Semera, capital of Afar. , and Mekele, that of Tigray.

The Ethiopian government has made the truce conditional on the withdrawal of the TPLF from the areas it occupies in the Amhara and Afar regions. As for the TPLF, it has agreed to cease hostilities on the condition that aid arrives in Tigray.

The TPLF is ready to evacuate Afar, observers believe. “The truce should be followed, except under the influence of local factors, especially in Afar: the Afar government has little control over Afar territory. It will be difficult to prevent the population, which is also hungry, from blocking the convoys, ”said René Lefort.

Observers, on the other hand, consider it unlikely that the TPLF will evacuate the Amhara areas and that Amhara officials will open their route to Tigray to humanitarian convoys.

Can the truce lead to a lasting ceasefire?

The truce makes a lasting ceasefire a little more likely, analysts from the Eurasia Group believe, but their preferred short-term scenario remains a resumption of low-intensity fighting, “even if the main players no longer envisage a total military victory”.

The truce serves “in an attempt to build trust between the TPLF and the federal government, but a full and lasting ceasefire remains unlikely in the short term, due to the intransigent positions of both parties on certain issues”.

The rapid restoration of basic services – electricity, telecoms, banks… – in Tigray, as well as the removal of the TPLF from the list of “terrorist groups” will be a test of the goodwill of the Ethiopian government.

The truce could “be a turning point, everything will depend on whether it has good intentions”, sums up Awet Weldemichael. “I hope it’s a starting point for talks, but it’s not very promising. »

What are the obstacles to peace?

Even if a lasting ceasefire is established with the TPLF, it is not the only player in northern Ethiopia.

The federal government is facing growing protest from part of the Amhara elite, which is opposed by territorial disputes to the TPLF in western Tigray: Amhara regional forces are present there and are not under the direct control of the federal government.

“For part of the Amhara, it is necessary to go as far as Mekele to crush the TPLF. However, authorizing humanitarian convoys to Tigray means renouncing this military reconquest and therefore leaving the TPLF in place,” explains René Lefort, who also underlines the “military danger” represented by the OLA.