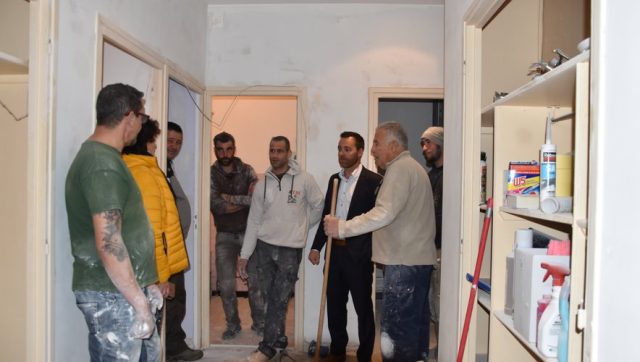 The town hall has made available an apartment that has been unoccupied for more than six years. The inhabitants of Fleury-d’Aude, but also companies in the sector, completely voluntary, have taken charge of the renovation of the places which will be able to accommodate, in due course, about fifteen Ukrainian refugees. Meet.

“When you see the children, their mothers, left to fend for themselves, threatened with being picked up by the mafia, it twists my stomach.” Thomas Tiscar is a building contractor and, at the moment, there is no lack of work. However, he did not hesitate to drop everything to give a little of his time in favor of Ukrainian refugees. “I saw the call from the mayor of Fleury-d’Aude: I spoke to my wife about it and I decided to bring my know-how. I stopped all my construction sites to come and work here” , he says.

On March 5, the first Perignan magistrate had indeed posted a message on social networks to initiate a surge of solidarity: “The City has many properties which, unfortunately, have not been maintained, confides André-Luc Montagnier. We have this house, at 2, rue du Thym, which was originally intended for emergency care. For six years, it had not been occupied and had even become uninhabitable, downright unsanitary. therefore arms, energy to carry out the renovation site as quickly as possible and to welcome refugee families in dignified and comfortable conditions.”

The response of the inhabitants was not long in coming. In two stages, three movements, around twenty volunteers stormed the rue du Thym, rolling up their sleeves behind Sophie, a Pérignanoise seasoned in humanitarian operations: “People came forward saying: ‘I don’t know how to a lot but I want to be useful”. To clean, and the accommodation really needed it, you just need some elbow grease, so the tasks were quickly distributed.”

Océane, 16, Margot, 18, or Virginie, 46, have not been reluctant to the task, quite the contrary. Francis Rossignol, he brought his handyman knowledge. A former CRS, he is one of the many volunteers to help out: “I’m retired, so I have time: for me, it’s completely normal. When you see what’s going on happening, we can only be sensitive to the situation.”

In a few days (by next weekend, if all goes well), the 150 m2 house will offer seven rooms and all the necessary comforts to several refugee families: “We want them to feel at home with the beds made, cupboards full of clothes of all ages that we have collected, toys for children, pencils…”, insists Sophie.

For their part, the young firefighters of the town undertook the painting of the doors while others, Thomas and his employee in the lead, took care of mounting the plaster partitions. “Many companies in the region have donated materials to us: parquet, tiles, rails, plasterboard… A great surge of solidarity has been implemented within the municipality”, insists further André-Luc Montagnier who now needs mattresses and bedding furniture to complete the furniture generously offered by the inhabitants of the town.

“If we can give these families, these mothers, a little respite, that will already be it”, breathes Sophie. Sharing and an essential benevolence in a world that no longer turns round at all.

For the time being, the first magistrate of Fleury-d’Aude is suspended from the authorizations of the sub-prefecture: “But, if we can, we will provide a bus from the town as well as two minibuses to organize a convoy of equipment and to be able to bring families back. An ambulance from the town also offered a vehicle to accompany us.”

With the renovated accommodation, the mayor can also count on the inhabitants who have also offered to open their doors: “We have the possibility, today, of welcoming a good fifty people. The renovated accommodation on rue du Thym, a once the war in Ukraine is over – we hope as soon as possible – will be used to welcome Pérignanais in need, in an emergency social situation.