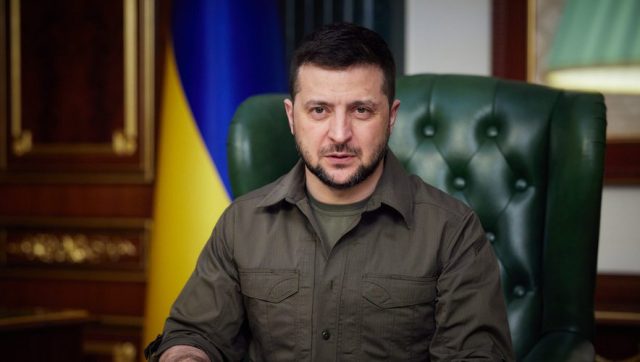 This Wednesday, March 23 at 3 p.m., Ukrainian President Volodymyr Zelensky is to address parliamentarians, in the context of the war in Ukraine. Before the French deputies, the Head of State had already spoken to the American and German elected officials.

Ukrainian President Volodymyr Zelensky will address French deputies by videoconference this Wednesday afternoon, March 23. A speech, which comes after a speech by the Ukrainian president before the American Congress and the German Bundestag last week and before the Italian Parliament on Tuesday, March 22.

#DirectAN Mr. Volodymyr Zelensky @ZelenskyyUaPresident of the Republic of Ukraine, will speak from kyiv to the national representation on Wednesday 23 March at 3 p.m.

The purpose of speaking out is to get more support. On several occasions, Volodymyr Zelensky asked Westerners to help Ukraine against Russia. The speech will be made by videoconference, as every time he has spoken, because for the Ukrainian president, leaving the territory is out of the question.

With each speech, Zelensky seeks to mobilize with him not only the political class, but also public opinion, by carefully choosing his references, explains in particular Frédérique Dumas, member of the Foreign Affairs Commission at Le Parisien. “He is looking to obtain the guarantee and the support of the leaders of the planet because the emotion of public opinion is one of the rare effective means of pressure on the leaders of our countries”.

Thus, as RMC reminds us, Zelensky did not fail to refer, in each country, to key moments in their history. For example, he mentioned the Berlin Wall in Germany, 9/11 and Pearl Harbor in the United States.

The Ukrainian strategy is to mobilize empathy around the situation in the country. This is what the Ukrainian parliament did in particular by relaying as a communication tool the shocking video showing European capitals in a situation of war, under bombardment.

Aim directly at the viewer

“He understood perfectly that to address parliamentarians, to elected representatives of the people, is to address the people. Each viewer who sees the speech can feel directly targeted or targeted”, explains Alexandre Eyries, teacher-researcher in sciences of information and communication at the University of Burgundy at RMC.

This speech will also be broadcast live and can be followed by French citizens who wish.

It remains to be seen what the response of French parliamentarians will be to this speech. For the time being, France supports Ukraine by sanctioning Russia with economic measures and has sent arms and equipment to the invaded country.